An abusive man who took control over his partner, banned her from washing, and demanded daily sex has been jailed for four years. 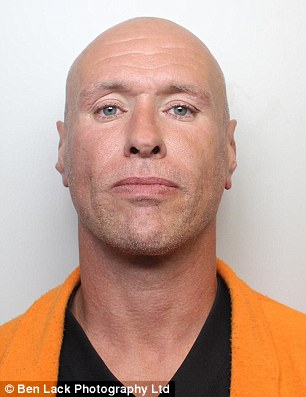 Graham O'Shea, 42, was jailed after a court heard he seized control of the woman's finances, taking her bank cards and gave her an allowance of just £10.

He walked her to a bus stop when she went to work and regularly accused her of cheating on him.

She was not allowed to wash herself or her clothing and was banned from seeing her family.

He beat her up twice, demanded sex with her on a daily basis, and 'intensively instructed' her to learn

chess, picking a piece and saying she would be 'leaving in a black box' if it was the last left on the board.

O'Shea, from Halifax, met the woman in a pub in March and promptly told people they were in a relationship.

He helped her move house following the end of a previous abusive relationship and then quickly move into her new home and took control of her life.

She told Bradford Crown Court she lived in fear of O'Shea and was petrified of him.

The woman, who cannot be named for legal reasons, planned to make her escape on May 21, when she told him she was going to work.

The victim however went to her father's home and phoned the police.

O'Shea was found guilty of controlling and coercive behaviour and given a life-long restraining order against the victim, her father, sister and refused access to areas of Halifax.