Recession? Man Arrested For Stealing Pot Of Soup, Wraps Of Fufu And Half Basin Of Garri 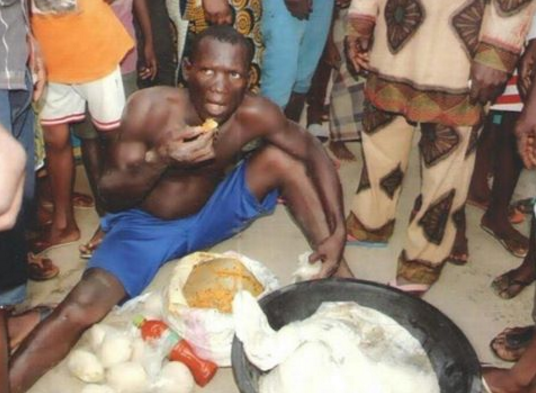 The 35-year-old, who was identified as Kaduna Enatimi, was said to be an indigene of Akassa community, Brass Local Government Area of the state.

The Head of the vigilance group, Chief MoneySweet Asomo, said the suspect was nabbed at about 2am while he was consuming the stolen food at a local shop in the area.

Asomo said when he was rounded up; the suspect claimed that hunger and economic hardship in the state compelled him to steal the food.

Narrating how the man was caught, he said:

“We were on patrol at about 2am on Thursday and when we got to the Timida School area, we saw a man at a local food joint eating. The food kiosk is owned by an Akwa Ibom indigene known as Mrs. Blessing. We questioned the culprit and he confessed to have stolen a pot of soup, some wraps of Fufu and half basin of Garri. He claimed it was the economic hardship in the state that led him to the act.”It was learnt that when the matter was reported to the Paramount Ruler of the Area, the Obenibe X1 of Epie Kingdom, HRH Hope Green Adike, the monarch asked them to parade the alleged thief.

The monarch reportedly insisted that the man should be taken round the community with the stolen items to act as a deterrent to others.

But the traditional ruler, who considered the excuse of hunger as weak, ordered the vigilantes to release him after the parade.