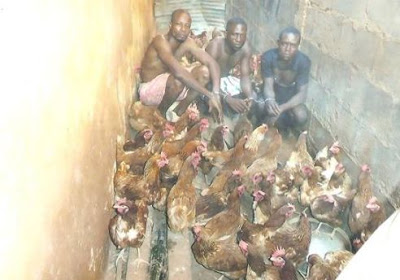 Three suspects have been arrested by the operatives of the Emene Division of Nigeria Police Force, Enugu state command for stealing poultry birds.

The suspects broker into a poultry farm located at Ugwuomu Nike in Enugu on 17/11/16 at midnight stealing domestic fowls numbering about one Hundred and fifty.

Two of the suspects identified as Sunday John and Uchenna Igoka were arrested on 23/11/16 at their hideout at Orjinator Oji River in Enugu state following intelligence information.

It was further gathered that following their arrest and revelation, a third accomplice, Onyeka Edeh was arrested. A manhunt has been launched to get other fleeing members of the gang.

According to Politics Ng, no fewer than 100 fowls have been recovered from the suspects, including a Toyota hiace bus, which they allegedly used during the operation.

Suspects are pleading for forgiveness and blaming their woes on 'satan'.