A Federal High Court in Lagos on Tuesday sentenced three Bolivians to six years’ imprisonment for dealing in illicit drugs. 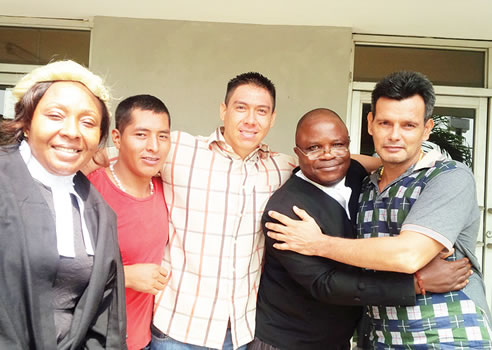 The convicts are Reuben Jorge, Yhugo Moreno and Yerko Dorado.

They were sentenced by Justice Oluremi Oguntoyinbo, who affirmed their guilty plea to the two counts pressed against them by the National Drug Law Enforcement Agency.

The convicts had been in detention since February 3, 2013, when they were arrested by operatives of the NDLEA on Daily Times Estate, Satellite Town, Lagos State, the base where they illegally produced Ephedrine and Methamphetamine.

The convicts were said to have been housed by their Nigerian accomplices between November 2011, and February 2012, before they were caught.

The NDLEA had told the judge that the foreigners violated Section 22 (a) of the NDLEA Act and were liable to be jailed for life or imprisoned for not less than 25 years.

But in her judgment on Tuesday, Justice Oguntoyinbo said what the law prescribed was a maximum of 25 years, but that a judge could, based on his discretion, impose a lesser jail term.

She therefore sentenced the convicts to six years on each count. She said the sentence would run concurrently and would start from February 3, 2013, when they were arrested.

Justice Oguntoyinbo said, “It is, therefore, in the light of Section 22 (a) and Section 12 of the NDLEA Act, that these three defendants, having been found guilty and convicted of the offences alleged in counts one and two of the charge (sheet) dated the 18th day of February, 2013, are now sentenced on count one to a period of six prison years and on count two to a prison period of six years.

“Both sentences shall run concurrently and shall be calculated from the date the defendants were first arrested, which is the 3rd day of February, 2013. The defendants have benefited from the commitment of their counsel. Both defendants and the NDLEA have a right of appeal.”

Following the judgment, the three convicted foreigners jubilated outside the courtroom where they hugged one another and posed for a snapshot by Punch correspondent.

The convicted foreigners were first arraigned on March 23, 2013, before Justice Ibrahim Buba of the same court, where they earlier pleaded not guilty to the initial six counts pressed against them by the NDLEA.

Following their not guilty plea, Justice Buba admitted them to bail in the sum of N50m each with two sureties in like sum.

The judge said one of the sureties must be an owner of a landed property in Lagos valued at not less than N10m, while the other must be a Bolivian with resident permit in Nigeria.

The foreigners were equally ordered to report weekly and sign an attendance register at the office of the NDLEA, to show that they were still in Nigeria.

They were mandated to sign and file an undertaking that they would not delay trial.

In spite of the bail, the foreigners remained in detention as they found it difficult to perfect the bail