Fears have gripped residents of Joseph Harrison Street in Yaba area of Lagos State, following a letter to the community by armed robbers. 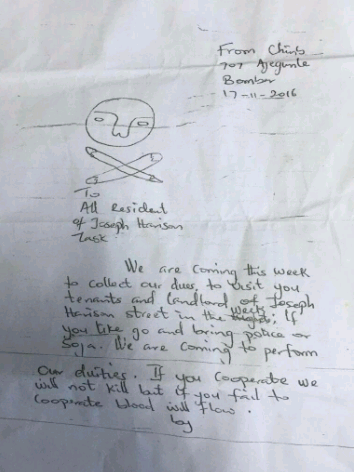 The suspected armed robbers, who simply identified themselves as Chubi from Ajegunle area of the state wrote the residents that they were coming to collect their “Christmas dues”

The letter, which was hand written was placed on the vehicle of one of the residents of the community and it was discovered on Tuesday morning.

The suspected armed robbers in the letter write   “we are coming this week to collect our dues and to visit you tenants and landlords of Joseph Harrison Street in the week, If you like go and bring police or Soja, we are coming to perform our duties. If you cooperate we will not kill but if you fail to cooperate blood will flow by.”

The chairman of the community, Bolanle Akinyemi confirmed the letter and added that the residents were yet to decipher the motive behind the letter.

The community chairman said “before the letter was brought to the estate, we enjoyed peace because we engaged guards and policemen from Sabo division and we are also mindful of the slum that surrounded us and we have been conscious.”

He narrated that “When the person picked the letter he actually thought it was from assassin addressed to him and locked around if he could find such a letter in other vehicles parked in the estate.”

Akinyeni stated that as parts of the preparation for the robbers, the community had contact the police at Sabo police station and that the vigilante group in the area had been mobilised to increase their men.

He stated that security guards had been deployed to the three main entrances to the estate and that they had been instructed to patrol the estate, day and night.