Players of the Super Falcons, who on Saturday defeated Cameroon to win their eighth African Women Nations Cup title, yesterday rejected the Nigeria Football Federation’s (NFF) directives to vacate their Agura Hotel, Abuja camp, saying they would not leave the camp until all their emoluments were settled. 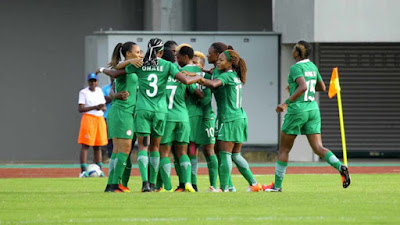 The players claim that the NFF has not paid them camp allowances, match bonuses and their coaches’ salaries, which have accrued for over eight months.

One of the players, who pleaded anonymity, told The Guardian that “officials of the federation came to give each of us $100 as transport allowance and told us to go home with the promise that they will pay us in January.

“That was the same trick they used to deceive us after the qualifiers in Abuja and up till now nobody has said anything about the outstanding bills.

“Now, they are telling us that they are making arrangements for the president to host us at the Presidential Villa. All these are stories we are tired of. We want our money, full stop.”

The NFF yesterday pledged to pay the players and their officials for winning the Women Africa Cup of Nations, but it craved the understanding of the team that the money is not readily available at the moment.

In a statement yesterday, NFF General Secretary, Dr. Mohammed Sanusi, who met with the players and officials at the Agura Hotel, said the Federation was not happy owing players and coaches, but present severe economic challenges informed that it could only continue to seek the understanding of these persons, as well as hoteliers, travel agents and Management and Staff until the situation improves.

“There is no gainsaying that there is severe economic challenges and all organisations, whether government or private, are feeling the pinch. It is not Government’s doing; it is not anybody’s doing. We know we have financial commitment to you (players and officials of Super Falcons) and we have not at anytime stated otherwise. But the money is not readily available at the moment. I have come to appeal to you, to understand the situation of the Federation, to understand the situation of the country at the present and exercise patience. We will pay you all monies you are being owed as soon as we receive same from the Government, just as we paid the U17 boys who won the FIFA U17 World Cup in Chile last year, after the tournament. And just as we sorted out Coach Samson Siasia’s wages as soon as we had the funds, after the Olympics.”