Two minors, identified simply as Segun and Kalesanmi, and a 22-year-old tiler, Samuel Osholo, have been arrested for allegedly defiling a seven-year-old girl. 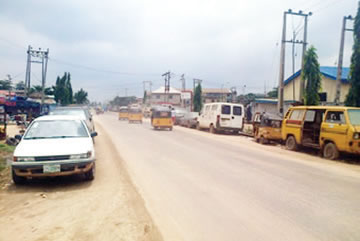 The suspects reportedly covered the girl’s mouth and took turns to defile the primary one pupil inside a building under renovation on Adaraloye Street, Ikorodu, Lagos State. They were however caught in the act by the victim’s peers, who had gone into the building to play.

PUNCH Metro reports that Osholo and 17 year old Kalesanmi had gone to work in the building,

which is a stone’s throw from the victim’s residence. The duo also lived in the neighbourhood.

They were said to have persuaded 10-year-old Segun, the girl’s neighbour, to lure her into the building around 6pm on Friday.

The victim’s father, a trader, said one of the children, who caught the suspects in the act, confided in his wife, adding that he was informed about the incident on the telephone.

“My wife and I work in Oyingbo and we usually return home late. But that day, my wife returned home before me. She explained to me that a girl told her that our daughter had been defiled. I rushed home immediately. The girl mentioned Segun and I went to meet him. He confessed and mentioned the two other suspects.“I reported the case at the Igbogbo Police Division and they were arrested. There was sperm in her pants and the police confirmed it too. We took her for treatment at the Ikorodu General Hospital.“Since yesterday (Tuesday), my neighbours have been threatening me for taking the matter to the police. If anything happens to me or any of my family members, I will hold them responsible.”Segun confessed to the crime at the station, saying that he persuaded the girl to follow him to the building after the other two suspects promised him some money.

“The girl and I live in the same house. They told me to invite her to meet them in the house where they were working and I did. They asked me to get a piece of cloth and paper. They put the paper on the floor and laid the cloth on it. They instructed me to take off her pants and sleep with her.“I removed her pants and slept with her. They also slept with her. The girl began to cry and they covered her mouth. I felt sorry for her. I told them to stop, but they refused. They said she would not die and that nobody would know. They also promised to give her money.”However, Osholo and Kalesanmi, who spoke in Yoruba, denied raping the girl, adding that they had finished work and left the area before the incident occurred.

“I don’t know anything about this case. A building is being renovated on Adaraloye Street and we were asked to fix the tiles. I don’t know where the incident happened. The girl is lying against us,” Osholo said.Kalesanmi said,

“There was a misunderstanding between the girl’s father and my elder brother. They fought recently and the girl’s father broke a bottle and threatened to stab us.“While people tried to settle the matter, he called his daughter to a corner and spoke with her secretly. I don’t know what they planned. This allegation was made out of annoyance.”The suspects were brought before an Ikorodu Magistrate’s Court on Tuesday on seven counts bordering on unlawful sexual intercourse. While Segun pleaded guilty to the charges, the two other defendants pleaded not guilty.

The presiding Chief Magistrate, Mrs. A.A. Oshoniyi, granted Osholo bail in the sum of N200,000 with two sureties in like sum and ordered that he should be remanded in prison pending when his bail conditions would be perfected.

Adjourning the case till January 26, 2017, Oshoniyi held that Segun should be kept in Boys Remand Home in Oregun, Lagos, while Kalesanmi should be remanded at Borstal Home, Abeokuta, Ogun State.