Man Who Stole 2 Kids Says He Attracted Them With Sweets, Fried Yam (photo)


A child traffic suspect identified as Roland Egbe, who was paraded by the Commissioner of Police in Abia State, Mr. Adeleye Oyebade, at the police officers mess in Umuahia, the Abia State capital, has confessed that he bought fried yam to attract the two kids he allegedly stole from their parents. 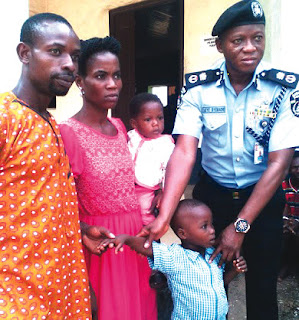 Abia CP, Adeleye Oyebade handing over rescued boy to his motherThe suspect added that he handed the children over to his friend identified only as Uche, who in turn sold them to one Chioma Ohajimadu and Mrs. Comfort Ogbonnaya who reside at No. 69, Ososu road, Aba.

Egbe, who claimed to be a ticket seller at Oyigbo in Rivers State, said Uche introduced him to child

trafficking business and persuaded him to get a child urgently as a buyer was already waiting to pay for the child.

“One evening, about two weeks ago, I went to eat at Oyigbo roundabout, Uche started calling me repeatedly to get the child he told me to bring. But I told him that I know the parents of the child I wanted to bring to him and I don’t want to hurt them. However, he insisted that I should bring the child.“After speaking with him, I asked him to come around and wait for me. Then I went to where the children normally gather to play around the area because the little boy, Marvellous Heart, normally comes to me each time I am around his mother’s shop.“When he saw me that evening, he ran to me and l bought sweets for him; from there, I carried him and met Uche, who was waiting for me at a distance. That was how we took the boy to Aba. He gave me N50,000 only and promised to pay me the balance later.“But after some days, the woman that bought the boy started calling me to complain that she doesn’t want the boy again, that we should bring another child for her. That was how Uche forced me to go and steal another child for the woman.“The second time, I saw some children around a spot where they sell fried yam around Imo River and bought some fried yam for them. When I was leaving, I left with one of them.”Narrating his ordeal, the father of the boy, Mr. Shedrach Heart, said he reported the incident to the police at Obehie when his child got missing and went to his church for prayers, where he was assured that his child would come back alive.

“Roland has been our family friend, any time he comes around to play Loto around my wife’s shop, my child normally runs to him and the two of them will stay together until he leaves. On that fateful day, my boy ran to him and he carried him to buy something for him. From there, he took him away.”The illegal adopter of the stolen children, Chioma Ohajimadu, also confessed to the crime, adding that she could not afford to adopt a child through the normal process because it was exorbitant for her.

She explained that she later resorted to use a man who promised to help her to adopt one at a cheaper rate. She said,

“I’m a widow with a son of about 17-years-old. But I needed another baby in my family. The Uche in question was my primary school student.“When we met at Aba, he told me he works with the motherless baby’s home and I informed him that I needed to adopt a baby and I have gone round, but the price they were giving me was exorbitant.“He promised to help me out since he works with them. So, about two weeks ago, on the 18th of November, he called to inform me that he has got the baby for me. He brought the boy to my house with Roland.“I spent one night with the baby and found out that he was too rough for my liking. So, I called him to come and take the baby and get another one that will be calm for me. But he said he can’t take back the boy again, that he finished the registration of his adoption at the motherless baby’s home.“That was why I called a woman that works at another motherless baby’s home and asked her if she knows of any woman that needs a child and she said yes and asked her to bring the woman to take the boy they brought for me because I don’t want him again.“She asked  me to bring the child and she then invited Comfort Ogbonnaya to take the boy, it was in the process of adopting the second baby that I was arrested by the police.”Speaking while parading the suspects, Oyebade said Egbe was earlier arrested and paraded for child trafficking on December 7, 2016, before the operatives attached to the Special Anti-Robbery Squad at Obehie rescued the four-year-old Heart stolen about two weeks ago.

The Commissioner of Police warned parents to monitor their children closely and warn them to stop accepting gifts from strangers and people around them this Christmas period.