From Brothel to Altar! Recall that a church in Port Harcourt, Omega Power Ministries, on Saturday October 8th, 2016, converted 38 Port Harcourt sex workers and they were also baptized  by the General Overseer of the church. 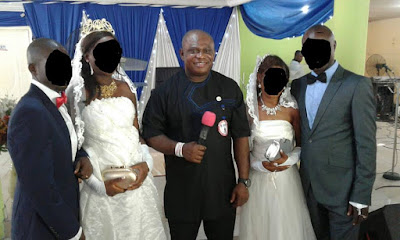 The church also rehabilitated the whole converts by providing them with free clothing, feeding, provision of shops stocked with wares and commodities to assist them in their new lives.  That same month, one of them wedded. Fast forward to Saturday two more of the girls have wedded.

Read what the church' official Facebook page posted along with the above photo...

Omega Power Ministries, a wild fire growing Christian denomination in Rivers State, Founded and established under the Spiritual leadership of a 43years old man of God “Apostle (Dr) Chibuzor Gift Chinyere have started counting the dividend of the recent Church Evangelism as two more additional repented sex workers entered into a holy matrimony . The duo who hailed from Oron, in Akwa Ibom State were among the September 2016, OPM converted sex workers in one of the church outreach program in Diobu, Port Harcourt. While officiating the marriage on Saturday December, 17th 2016 at the OPM branch church in GRA Port Harcourt, the General Overseer said, he was delighted to see the young girls whose life’s were almost condemned to death by Satan the Devil getting married to husbands of their choice. The wedding which was the third in it series has within an interval of three months witnessed four of the repented sex workers be joined in marriage with the church bankrolling the marital expenses. Speaking further, the Apostle said he will never relent in his prayers to ensure that all the OPM converted sex worker got married and live a sinless life according to God’s will. He added that although the rehabilitation program of the sex workers is capital Intensive but his joy was full when comparing the spiritual and financial blessings of God arising from such humanitarian services upon the church.  One of the bride who identified herself as Gloria (not real name) said “I was never a prostitute in my life, I was in my SS2 at Sonya Secondary School, Lagos, Ileaved with my uncle when suddenly condition became so unbearable that I have to relocated to my village in Oron, at Akwa Ibom State. A day came when one wealthy woman from Port Harcourt visited my parents to request that I should return with her to Port Harcourt to work as house mad with a monthly stipend of ten thousand naira, I gladly followed her. My madam’s husband worked in shell and we used to attain SaviourMinistry Church. One day my madam travel to America and directed me to always make sure I clean the house and take care of her husband domestic work. Shortly after she left, my madam’s husband called me into his bedroom and wanted to have sex with me but I refused, when my madam returned home, I could not summon courage to tell her, but to my greatest surprise, my madam’s husband requested I should be sent back home. Five thousand naira was giving to me and that can hardly take care of my transport fare and feeding. That was how I found myself in a brothel in Port Harcourt doing prostitution to earn a living. Not quite four months, into my prostitution business that God send Daddy OPM to visit us in Diobu to restore our life. Today I am fully restored in the Lord and have gotten weded to a husband of my choice, may God receive all the glory for raising a man like Daddy OPM for my sake”.  The situation was not different with the second bride who identify herself as “Nset” (Not real name) Nset in her reaction said she was 22years of age and a dropped out SS2 student of Mirian Secondary School, Oron, when a lady tricked her with a business proposal to Port Harcourt unknown to her that it was a prostitution work. On arrival in Diobu, Port Harcourt, the lady asked her to pick up a street hawking business, a trade that finally landed her in a brothel. According to Nset “Anytime I slept with any man my madam will be the person that will collect the money and gave mepeanut to buy food for myself, while in the business I lost my senses, and could not be able to take care of my domestic need anymore and cannot even expressed myself. I can only remember how to sleep with men but cannot realized how much I make for myself. I suffered from this problem until Daddy OPM came and rescued us from Diobu, because this my problem I became a burden to the church that took care of me. One day Daddy OPM requested that I should be sent home and at that point I concluded to terminate my life. Touched by the planned to end my life, Daddy OPM resented from the plan eviction but rather directed that I should be placed on monthly salary. While waiting for God Intervention in my case my husband appeared and propose to marry me and that was a turning point in my life. I regain my senses almost immediately I had the marriage proposal. Similarly the grooms were not left out as they dance with joy, celebrating their newly wedded wives. They thanked the servant of God for making himself available to bless their lives, and provided them with an accommodation after wedding."