Donald Trump has blasted Barack Obama for claiming he could have won a third term in the White House if he had been the Democratic nominee instead of Hillary Clinton. 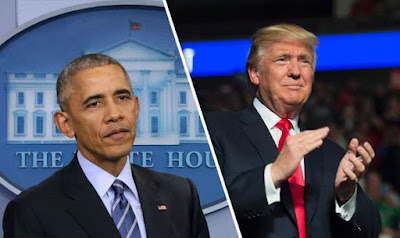 What happened was CNN on Monday published an interview that former Obama senior adviser David Axelrod conducted with his old boss, who claimed the vision of a united America he stressed in his famous 2004 Democratic National Convention keynote speech is still powerful enough that it

'You know, I am confident in this vision because I'm confident that if I – if I had run again and articulated it, I think I could've mobilized a majority of the American people to rally behind it.''I know that in conversations that I've had with people around the country, even some people who disagreed with me, they would say, "The vision, the direction that you point towards is the right one",' he said.Firing back however, the US President elect,  Donald Trump in a Twitter post rebuffed any suggestion that he would not have been able to take on Barack Obama had the current president run again.

'President Obama said that he thinks he would have won against me,' the president-elect tweeted. 'He should say that but I say NO WAY! - jobs leaving, ISIS, OCare, etc.'Disappearing jobs, the shortcomings of the Obamacare medical insurance overhaul law and the rise of the ISIS terror army were major campaign themes Trump leveraged to draw lines of distinction between himself and the Democrats.

Mr Trump also took aim at the United Nations who he chided as “sad,” just days after the UN Security Council adopted a resolution demanding an end to Israeli settlements despite pressure by the US president-elect for a veto by Washington.

“The United Nations has such great potential but right now it is just a club for people to get together, talk and have a good time. So sad!”

Meanwhile, Obama also said in the CNN interview published Monday that he might not stay on the sidelines and let his successor Trump have the spotlight all to himself, if Trump's presidency raises 'foundational issues about our democracy.'

He seemed to be firing a warning shot that while he has no immediate plans to be vocal as a former president, that might change if he thinks the Trump administration threatens his own values.