The Oluwo of Iwo, Oba Abdulrasheed Akanbi, has urged monarchs in Yoruba land to throw away the various idols in their palaces, saying God hates idolatry. 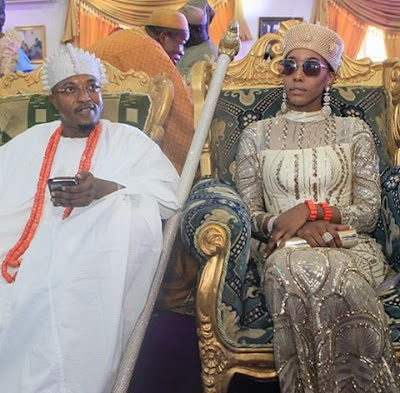 Speaking to Punch in a telephone interview with their correspondent in Osogbo, on Tuesday,  Oba Akanbi said he believed that the palaces of monarchs must be without idols, warning traditional rulers to shun idolatry, saying God would not help any town whose monarch worshipped other gods.

The Iwo monarch explained that people should be able to come to palaces and pray to God, saying

this would not be until the monarchs rid their palaces of strange gods, which he said could not help them.

“Our palaces must be clean and devoid of any idol. There is authority in the mouth of any monarch who is clean and who shuns idol worshiping. Our palaces must be devoid of idols.“I removed the ‘Ogun Odela’ in front of my palace and asked them to take it to Ogundigba (far from the palace) because of this. This happened about two weeks ago.“Oba must not kneel down before anybody to pray. This is a message or a warning to all the kings and let me tell them that their palaces are the habitation of God on earth. God was dwelling with us before churches and mosques were built.”Oba Akanbi said the era of monarchs sitting back in their palaces and expecting their subjects to bring tributes to them was long over.

According to him, service to the people is necessary for any monarch to be loved by his subject.

He said Oduduwa became the greatest king in Yoruba land because of his love and service to the people, stressing that there had not been any leader like Oduduwa because kings had not been serving their people the way Oduduwa did.