The management of Arik Air would like to respond to Nigerian Civil Aviation Authority’s (NCAA) statement on Tuesday, 27 December, 2016 over short landed baggage of passengers who traveled on its flights from London Heathrow to Lagos on the 2nd, 3rd and 4th of December, 2016. 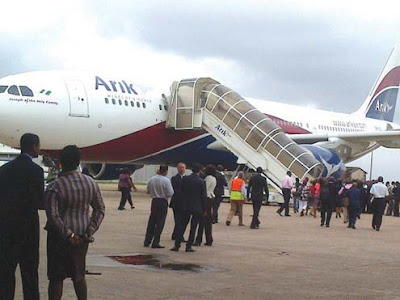 The NCAA had invited the management of Arik Air to an informal meeting on Friday,  December 16, 2016 where the airline explained the circumstances leading to the sequence of events and detailed the efforts it had deployed to recover the short landed baggage. Despite this, NCAA issued a letter with reference number NCAA/DG/CSLA/RM/1-06/16/439 on 22nd December, 2016.The NCAA’s action of publicizing this letter before the airline has had an opportunity to formally respond to them by the deadline stated in their letter is rather unprofessional.Arik Air did everything possible to ensure the London passengers got their baggage in good time. When the airline’s wide body A330-200 aircraft was damaged by a ground handling truck, it deployed a B737-800 on the London route to minimize the disruption to the passengers. All passengers checking in from London were given a letter informing them of the capacity limitation and weight restriction on this aircraft type and advised that some of their baggage would be delayed because of this and transported on the next available flight with capacity. All passengers were accepted on to the flight based on this understanding. However, after arriving in Lagos some of them formed pressure groups and took the laws into their own hands disrupting the operations of the airline, assaulting the airline’s employees and destroying its property. Some of the airline’s employees were beaten and hospitalised and some of them are still receiving medical treatment as of date.In order to address the reduction in capacity and backlog of baggage, Arik Air leased another wide body A340-300 aircraft to complement its B737-800 aircraft to ensure the delayed baggage got back to Lagos in good time. However, some of the passengers disrupted our operations for several days thereby making it impossible for the aircraft to operate from Lagos and return from London Heathrow before the night curfew, further preventing the short landed bags from being recovered. Federal Airport Authority of Nigeria (FAAN) security did nothing to prevent the passengers from disrupting the airline’s operations or in providing adequate security to the airline and its personnel to enable the flights to leave on time thereby preventing a quicker resolution in the recovery of baggage.  Some FAAN security personnel were also encouraging passengers to disrupt checking-in process and seated themselves on top of Arik Air check-in counters.Arik Air uses this medium to communicate to all stake holders that we would be formally addressing each of the issues raised in the NCAA statement and in their letter within the seven (7) working days deadline stated in their letter. The airline also appeals to all the industry stake holders and agencies to uphold and protect the rights of operating airlines in the country in dealing with total lawlessness and security breaches by individuals. Signed: