A 61-year-old man, Timothy Onyeukwu, who allegedly camped a 10-year-old girl in a hotel for months and having canal knowledge of her at will, has been arrested in Abia State. 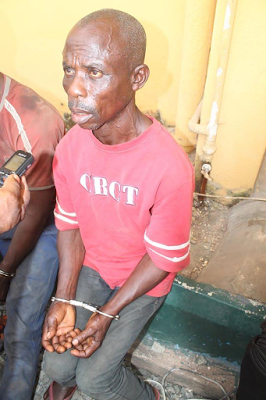 The suspect was paraded alongside a fake Nestle food manufacturer, armed robbery suspects, burglars and cultists, before newsmen on Wednesday.

Parading the suspects, the Commissioner of Police, Adeleye Oyebade, said the operatives of the Central Police Station Aba, swung into action and arrested the man.

He added that the victim had been taken to hospital for medical attention.

“The suspect confessed to have been sleeping with the little girl for months in the hotel,” the CP added, noting that the suspected rapist will be charged to court soon.