Check Out The Nigerian Stars That Didn’t Shine In 2016


Some stars came into the Nigerian music scene and like meteorite, they were up in the sky, shining like light and having so many fans endeared to their heats.  But in 2016, it was as if their light started dwindling. When so many thought they might have been cooking something in the studio hoping such would be released before the end of the year, these stars lived on past glory while new acts sprang up and some of their contemporaries shone brighter. 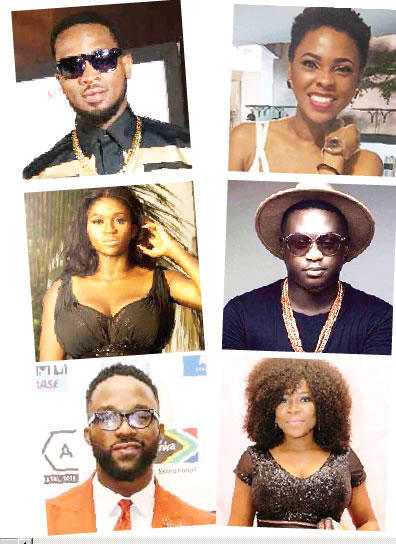 Not just a few believed Omawunmi would excel going by her performance during the Idols reality show that shot her into limelight in 2007. She has cemented her name as an achiever and force to be reckoned with in the Nigerian entertainment scene. Her sophomore album, ‘Lasso of Truth,’ which was released in 2015 was said to be a commercial success. Omawumi managed to break that jinx where just male artistes had held sway in the music scene for a long time.But fast forward to 2016, not much was heard from the singer musically. Thank God for social media anyway, but for Instagram where the babe would always post one or two stuff, her presence would have dwindled considerably.Yes, she managed to release a song with Grammy Award winner, Angelique Kidjo but did it have a very positive impact in her career in 2016? No!Anyway, fans still love her and hope that not only would she change her hairstyle in 2017, she would also come up with better and bigger hits.

And like her bestfriend Omawumi, Waje was almost pushed to the background this year.

Save for ‘The Voice Nigeria’ which kind of kept her busy as a judge in the reality show, Waje’s impact in the music scene was almost insignificant. Waje has been  busier on social media than in the studio this year. Yes, fans got to know more about her grown up daughter and her cool dresses which she proudly showed off every now and then. And of course, she also proudly showed off her figure as she transformed from a plus-sized babe to a much trimmer lady.The last time Waje released her self-titled album was in May 2013. The album was critically acclaimed but ever since then, she has been releasing single tracks. This year, the music diva has been able to release only one track which she titled ‘Ominiknowest.’

It was once reported that the singer planned to take a four year break from music. So the question is, has she started the hiatus?

Chidinma ‘Miss Kedike’ Ekile is a typical example of the expression that great things come in small packages.The Project Fame winner started strong after the competition winning any award that she was nominated for. One of such milestone awards is the Kora and she was the first female musician to get to the number one spot on the MTV Base top ten countdown. With her trailblazing success, she won the admiration of many as several celebrities have openly confessed that they have a crush on the petite damsel.The girl didn’t allow her small frame to deter her from conquering the music industry. But that was long ago.This year, Chidinma was busier arousing people’s curiosity as to whether she is dating artiste, Flavour or not especially when she deleted all the pictures on her social media page save for hers and Flavour’s.It seems that the star is fast fizzling out of the industry. Not much has been heard from the singer musically this year. Her recent song, ‘Fall in Love,’ which she released some weeks ago does not have the same buzz that always characterises songs.So many fans expect Chidinma to wake up in 2017.

‘Oh, how the mighty has fallen’ would certainly be the expression on so many peoples’ minds especially when they think of the self-acclaimed entertainer and Kokomaster, D’banj.With his ‘nothing-dey-happen’ attitude since he broke up from his partner and friend Don Jazzy, D’banj has yet to make any strong impact musically.But thank God for his song ‘Emergency’ which was released early in the year, it was a good work and so many people felt D’banj had finally survived the break-up.Alas, his ‘Focus,’ ‘If no be God,’ ‘Breaking New’ and ‘Gifted’ didn’t make any impact at all. D’banj needs to step up his game in 2017, otherwise his career would land in Emergency Room!

Well, thank God for ‘Krukere,’ nobody would have known Iyanya apart from the fact that he was a sensation at the then Project Fame competition.Another thing that stood him out is his sexy body which makes ladies- old and young – go wild! But how has that affected his career in 2016?His controversial exit from Ubi Franklin’s Triple M Records made more headlines than the release of his following songs, ‘Type of woman,’ ‘Nothing Mega,’ ‘Yoga song,’ ‘Sukumma,’ ‘Why,’ and ‘Heartbeat.’ Just a handful of people would have ‘felt’ the songs.With his new marriage to Don Jazzy’s Mavin, who knows, 2017 might be a better year as hopefully, the ace producer would give Iyanya his Midas Touch.

It seems Wande Coal found his sound late this year with the new song, ‘Iskaba,’ which he released few weeks ago. Before then, nothing much was heard from the young man. His first album, ‘Mushin to Mo’hit’ was a collector’s item but his sophomore album, ‘Wanted,’ which was released in 2015 was not really wanted by a lot of people as many have described the album as a flop.Hopefully 2017 would be better for the dreadlock wearing singer.  List was compiled by 'Nonye Ben-Nwankwo and Ademola Olonilua of Punch. Do you agree?