A jilted 32-year old man, who was dumped by his wife on a wedding day over her suspicion of his having a low sperm count challenge, has married another woman who is now heavily pregnant for him. 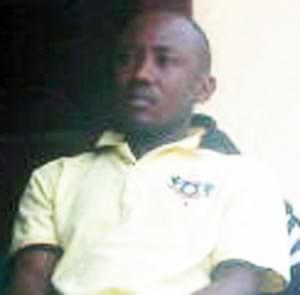 The man, Ekene Uzoigwe, got married to Ifunanya Igwebuike, according to Igbo tradition and had wanted to consummate the marriage at St Patrick Catholic Church, Umuchu in Aguata Local government area of Anambra State.

However, Ifunanya, a graduate of Federal Polytechnic, Oko, Anambra State, did the unthinkable when she snubbed her groom on her wedding day and called off the wedding already arranged by the

The wedding was to take place on Saturday, 3 January, 2015 and guests invited to witness the ceremony were shocked when Ifunaya refused to show up in church to tie the knot with Uzoigwe.

After several hours of waiting, P.M.EXPRESS gathered she later sent a message to the Parish Priest, Rev. Father Lawrence Maduagwu, that she was no longer interested and asked him to cancel the wedding.

Ifunanya alleged that she could not go ahead with the marriage because she was a graduate unlike Uzoigwe whom she claimed was a school drop-out.

She also claimed that she suspected that her husband-to-be then was impotent because he had been unable to impregnate her after several months of their courtship.

Rev. Maduagwu had no option than to inform the groom and the guests that were already seated at the church hall that the wedding had been cancelled. This caused an uproar in the church with guests expressing shock over what happened.

After the sad event, Uzoigwe moved on and married another wife who is now pregnant and will be delivered.

When our correspondent contacted Ifunanya, she said had forgotten the whole thing and moved on with her life.

She also said her family has refunded to Uzoigwe everything he spent.

Narrating what happened, Uzoigwe said he met Ifunanya at their home town, Umuchu, where he proposed to her marriage and she agreed on condition that he would send her to school, which he agreed.

He said after she gained admission, he was financing her education and they agreed to wed during her final year.

He said he had paid her bride price and she was part of the whole wedding plan and he even gave her parents N160,000 to prepare for the wedding, besides other arrangements and expenses incurred on the wedding and reception.

“If she had informed me, I would not have made arrangements. We had already cooked food and bought drinks for the wedding,” he said.

Uzoigwe said when he contacted her parents about the whole incident, they only told him that they could not forced her to go against her wishes but only asked him to come and take back the money he gave them to prepare for the wedding.

Uzoigwe said he was still in shock about that incident because he did not have any quarrel with Ifunanya before the fateful day.

He said he also made sure she was comfortable by making money available to her while in school.

Uzoigwe is a business man based in Abakiliki, the Ebonyi State capital.