As part of measure to ensure strict

offences by the state taskforce on

Environmental and Other Special Offences

Governor Babatunde Fashola , had on

bill into law for the governorÃ¢â‚¬â„¢s assent. 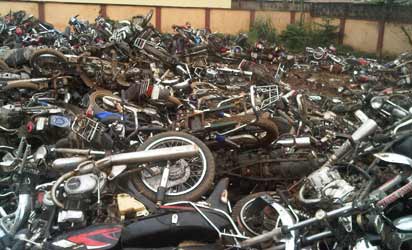 Men of the state task-force had stormed

environs where the operation of Okada

riders has been restricted under the new

law, impounded okadas found to have

The motorcycles were impounded within

the period of August to September, in the

that okada riders comply with the dictates

of the road traffic law.

spoke with Vanguard, described the

destruction of bikes by the state

government as anti-masses and a way to

systematically wipe them out of Lagos

through the destruction of their legal means

According to Musa, an okada rider, under

the umbrella of concerned riders, the

crushing of the motorcycles, is a form of

witch-hunting by the state government to

force them out of business.

to go after us, we are not robbers, we

work for our daily living. At least they can

sell the bikes through public auction if truly

they donÃ¢â‚¬â„¢t want us out of business.Ã¢â‚¬Â

Speaking on the destroyed bikes, Chairman

of the Task Force, Superintendent of Police,

the crushing at the task force yard in

Alausa, listed some of the offences to

include riding on kerbs, driving against

traffic and unauthorized places, operating at

late hours, urging operators to either

comply with the law or face its wrath.

Sulaimon said, Ã¢â‚¬Å“This is to n inform the

operators that the law has started and there

is no going back. The law has been passed,

signed and gazetted and we are going to

crush all the crush-ables at our plant in

Oshodi to show our seriousness about

Ã¢â‚¬Å“The ones that cannot be crushed will be

auctioned, but not in the state, so that they

He added that the taskforce has

commenced gradual enforcement of the

law, Ã¢â‚¬Å“we have not even enforced it fully.

But this should serve as a warning to them

because we wonÃ¢â‚¬â„¢t hesitate to impound any

okada that contravenes any aspect of the

According to him, the operators were not

arrested for prosecution as most of the

offenders abandoned their motorcycles on

Commenting on the protest staged by

concerned motorcycle riders to the Office

of the Governor recently, Sulaimon said,

Ã¢â‚¬Å“They have the right to protest, but the

government will be firm in what they do. It

doesnÃ¢â‚¬â„¢t in any way stop our job, those

who intend not to obey the law, we are

coming after them. They will be arrested

one after the other and we will be out there

He reminded that the Road Traffic Law did

not ban the operation of commercial

motorcycles but only restricted them on

highways, bridges and some selected 475

Keke Marwa are restricted from operating in

or risk their vehicles being impounded.

Chairman, Mr. Ade Ikuesan, had in a

statement co-signed with his secretary, Mr.

Mordi Elvis, expressed misgivings at what

he described as the blanket ban on okada

operations in Ikeja and its environs but

stated his desire for dialogue.

of the state government, explaining that it

was meant to properly regulate okada

operations in the state.

According to Perkins, Ã¢â‚¬Å“We are not

associations are planning. We are not

members operate on the route the state

government asks them to operate, there

will not be any issue.Ã¢â‚¬Â