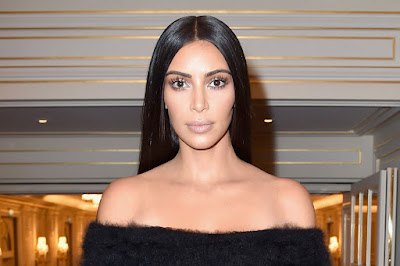 "I heard a noise at the door, like, footsteps, and I shouted to ask who was there, but no one answered."I called my bodyguard at 2:56 a.m. "Then, beyond the sliding doors, I saw two people arrive with the gentleman from reception, and he was tied up. Both men were hooded, one had a ski mask and he had a cap and a jacket with 'police' on it. The second man had the same 'police' clothes, but did not have any ski mask. ... It was the one with the ski mask who stayed with me."Recalling one of the burglars, Kardashian reportedly explained,

"He had a strong French accent and asked me for my ring [in English]. He looked at what was on the bedside table. It was worth $4 million."The report said the man repeatedly asked the reality star to hand over her diamond engagement ring.

"He took out a gun and I showed him the ring. He had gloves. He asked me where the jewels and the money were. And at that point, they tied me up and put plastic cables and scotch tape on my hands, and then taped my mouth and my legs."Next, the robbers took Kardashian to the bathroom, where they placed her in the bathtub inside her private residence at Hôtel de Pourtalès. Soon after, "they ran away," she explained.

"During the theft, they had the hotel's mobile phone that did not stop ringing, and they spoke in French. I got the impression they were saying they had to leave."Kim Kardashian said the men seemed "a bit inexperienced" as she was able to successfully remove the tape from her hands and mouth.

When authorities asked if she was hurt, the Selfish author reportedly replied,

"No. ... I want to leave, and go back to my children in the USA. A private plane is waiting for me at [Paris-Le Bourget Airport]."During the robbery, the men stole more than $10 million in jewelry, including diamond bracelets, earrings and a necklace with Kardashian's son Saint's name on it.

"When they pushed me onto the bed, they went to my purse and emptied everything," she added.A number of suspects were taken into police custody last week. Ten people have been charged in connection with the crime so far. Paris police believe the robbery may have been an inside job.