A 27-year-old welder, Sunday Hycenth, has been arrested by the Lagos state Police command for allegedly killing his friend, Onwe Ozoemelem, over a N500 dog meat. 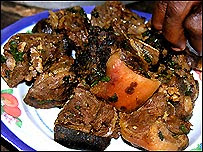 Dog meat served in a plateIncident happened in the FESTAC Town area of the state. PUNCH Metro reports that Hycenth and 26-year-old Ozoemelem had engaged in fisticuffs over the dog meat bought by their friend.

Sunday allegedly hit the deceased, Onwe with fist blows on the chest, after which he slumped and was rushed to a hospital, where he died.

transferred to the State Criminal Investigation and Intelligence Department, Yaba.

Hycenth hails from the Ezzamgbo area of Ebonyi State, while the late Ozoemelem was born in the Ezza North area of the same state.

The suspect said he worked as a welder around the Waterside area of FESTAC.

He said on December 30, 2016, when the incident happened, he was revelling with his friends when a man bought the dog meat for them. He said,

“The man that bought the meat for us is like a big brother . We started sharing it in the order of seniority. The meat had gone round and it remained two pieces for me and the deceased. He suddenly picked the two and ate them. He then dropped the plate.“I challenged him for eating the meat and he said the man that bought it didn’t say I must also eat from it. I told him if he needed to eat meat that badly he should have gone back to his village and that was how the fight started.”He explained that after some minutes of wrestle, they were separated.

The suspect claimed that he later went inside his room to drink water and change his clothes.

Hycenth said a few minutes afterwards, the victim began groaning with pain and complained of chest pains, adding that he was among those that rushed him to a hospital in the area.

Hycenth denied responsibility for the death of his friend.

“I didn’t punch him or use any object to hit him. It was just a normal fight and he was on top of me when we were separated. He told me he did not smoke because he had a chest pain that had been disturbing him for some time. I didn’t kill him,” he added.Punch adds that the police were awaiting the result of the autopsy conducted on the corpse while the families of the victim and suspect were making plans to bury Ozoemelem in Ebonyi.

Hycenth was on Thursday arraigned before an Ebute-Meta Magistrate’s Court on one count of murder. His plea was not taken for the charge.

The Police Prosecutor, Inspector Julius Babatope, asked that the defendant be kept in prison pending the release of legal advice from the Directorate of Public Prosecutions.

But the defence counsel, A.A. Onyiuke, urged the court to look into the facts of the case, saying the charge brought by the police was not appropriate.

The Magistrate, Mrs. M.O. Olajuwon, after perusing the case file, said the charge brought by the police was wrong.

“Both of them were fighting when one of them fell and died. So, it is not murder, but manslaughter. I am going to grant him bail pending the release of legal advice.”She subsequently gave the suspect bail in the sum of N500,000  with two sureties each in like sum.

Olajuwon adjourned the matter to February 6, 2017, for legal advice.