Eight men now control as much wealth as the world's poorest 3.6 billion people, according to a new report from Oxfam International. 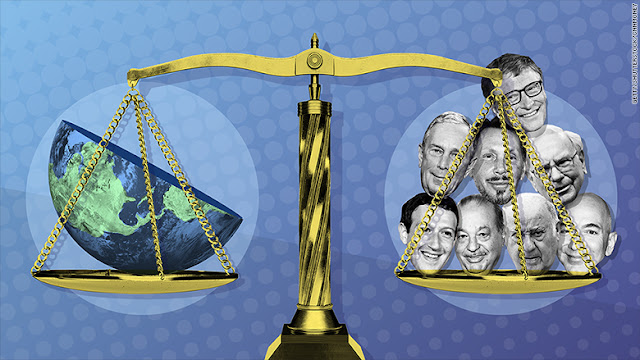 "Such dramatic inequality is trapping millions in poverty, fracturing our societies, and poisoning our politics," said Paul O'Brien, Oxfam America's Vice President for Policy and Campaigns.

The release of the group's annual inequality report coincides with the World Economic Forum in Davos. The annual meeting in the Swiss mountain resort brings together political and financial leaders and some of the wealthiest people in the world.

The Oxfam report said that the richest 1% has owned more wealth than the rest of the planet since 2015. In the U.S., the richest 1% control 42% of the wealth.

It has been four years since the WEF identified rising economic inequality as a major threat to social stability. But Oxfam said the problem is just getting worse.