Woman Slumps As Court Mentions Her Case For Hearing


Rita Effiong, 36, slumped in a Gudu Upper Area Court in Abuja on Monday when her case was mentioned for hearing. 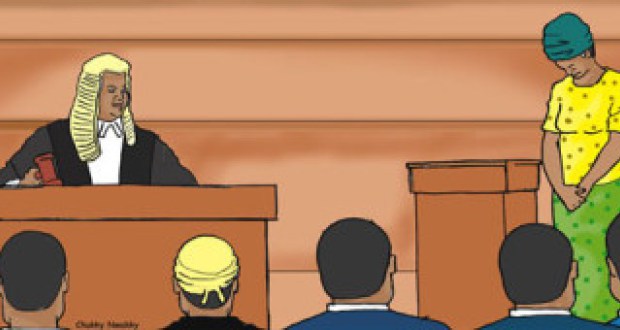 Her counsel, Mrs Grace Achesau pleaded that the matter be adjourned on grounds of ill health, adding that it was only the living that can stand trial.

“From what can be seen, my client is not fit to stand trial’’, Achesau stressed.The prosecuting counsel, Mr Fidelis Ogbobe, opposed the application for adjournment, saying that the defendant came to the court on her own.

“Besides, there is no medical report to prove that she is sick. I came with two witnesses who are ready to testify against her’’, Ogbobe added.

The News Agency of Nigeria (NAN), reports that Effiong is standing trial on a three-count charge of criminal breach of trust, cheating and escape from lawful custody.

After considering the arguments of both counsel, the judge, Mr Umar Kagarko, adjourned the case till Jan.18.

Earlier, the prosecutor told the court that Augustine Ekwu of 14 Winnipeg Close, Maitama, Abuja, had reported the matter at FCT Police Command on Nov.14, 2016.

He said the defendant had falsely presented herself as a visa agent to the complainant in 2012,.

“Based on this pretence, the complainant paid her N500, 000 with Guarantee Trust Bank cheque and equally gave her his international passport’’, Ogbobe said.

He added that all efforts made to recover the money and the international passport proved abortive.

According to Ogbobe, “she ran away from police investigation room before she was re-arrested by police officers on duty.’’