One Samson Onome has been arrested in Lagos for allegedly chopping off his neighbour’s left hand and inflicting injuries on his head. 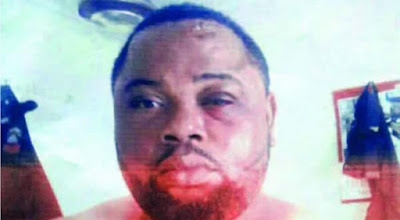 Onome and the victim, Wale Badejo, lived on Ilasan Housing Estate, Ajah, in the Eti-Osa Local Government Area of the state.

PUNCH Metro reports that Badejo was at a lotto centre on the estate last Wednesday when an argument ensued between him and some gamblers. The argument degenerated and Badejo reportedly

destroyed some items in the lotto shop.

After failed attempts to prevail on him to stop the trouble, a resident was said to have invited Onome, a tailor, to confront Badejo.

On getting to the shop, Onome reportedly confronted Badejo, resulting in a fight during which both men exchanged blows.

A resident, who identified himself as Emmanuel, said Onome later fled from the scene, but Badejo gave him a chase.

“The whole thing started as a minor argument between Wale (Badejo) and some people at the lotto shop. Samson (Onome) was called to prevail on him, but the situation became worse. They fought each other. At a point, Samson ran into his room and Wale followed him.“Wale barged into Samson’s room with a bottle. Samson also brought out a cutlass, hacked him on the head and chopped off his left hand. There was blood everywhere.”Another eyewitness, who spoke on condition of anonymity, said Badejo was rushed to the Lagos Island General Hospital, Marina, for treatment, while the incident was reported to the police at the Ilasan division.

“I was shocked, seeing the severed hand. He is still on admission at the hospital. The family was told that the possibility of fixing the hand was slim. The suspect is with the police,” he added.A police prosecutor, Corporal Friday Mameh, brought 34-year-old Onome before an Igbosere Magistrate’s Court on Tuesday on two counts of assault and attempted murder.

The defendant, however, pleaded not guilty and elected to stand trial. His counsel prayed that he should be granted bail in liberal terms.

Mameh objected to the application and prayed the court to remand Onome in custody on the grounds that he had committed a grievous offence. He said,

“The charge against the defendant is attempted murder, where he completely cut off the complainant’s hand with intent to kill him.

“The victim is in a critical condition in the hospital. The punishment on conviction is life imprisonment.”The presiding magistrate, Mr. B.A. Shonuga upheld the prosecutor’s argument.

“In view of the degree of injury inflicted on the victim, the defendant is hereby remanded in custody and the prosecution should forward the duplicate case file to the Directorate of Public Prosecutions for advice,” Shonuga ruled.The case was adjourned till February 6, 2016.