A Canadian woman has survived six days with no lungs thanks to pioneering surgery and state-of-the-art technology that successfully oxygenated and circulated her blood after both her lungs were removed simultaneously. 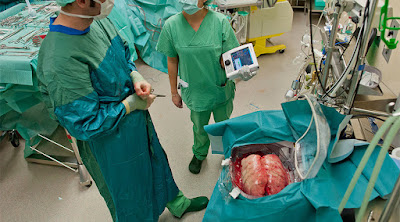 FILE PHOTO © Morris Mac Matzen / ReutersDoctors at Toronto General Hospital made the life-saving call with just hours to spare as Melissa Benoit, who suffers from Cystic Fibrosis, had contracted a serious, antibiotic-resistant lung infection back in April 2016.

“In Melissa’s case, our hand was being forced a little bit because she was actively dying, and if we hadn’t done something, she would have died that day for sure,” said Dr. Niall Ferguson, head of critical care at the University Health Network, at a news conference held on Wednesday.At the time, no donor had been found and there was no precedent for such a procedure but the team chose to make the high risk decision in the hope that a suitable donor could be found in time. They did not anticipate a wait of six days.

"For the first time ever, we had a patient in our intensive care unit with no lungs. In fact, she technically was on an artificial lung, an artificial heart and an artificial kidney for six days," said Dr. Shaf Keshavjee, director of Toronto Lung Transplant Program. “We didn’t know if we’d get [them] in one day or one month,” said Keshavjee.The two machines responsible for keeping Melissa alive as the lungs were removed, and over the course of the following six days, were a Novalung and an Extracorporeal membrane oxygenation (ECMO).

The Novalung infused Benoit’s blood with oxygen while removing carbon dioxide and the ECMO took on the responsibility of pumping the blood around her body.

As part of her recovery, Melissa has had to learn how to lift her head, raise her torso and stand again after almost six months in bed following the operation.

She is also preparing for another transplant in the near future as her kidneys were damaged throughout the process. Thankfully Melissa’s mother has agreed to donate one of hers as soon as her daughter is strong enough.

“You really come from the brink of death to back living at home. But I’m just so grateful, so happy to be home,” said Benoit.