An orphan, who had no one to take care of her, 16-year-old Janet (not real name) happily agreed to leave her hometown in Akwa Ibom State to work as a housemaid for the family of Mrs. Perpectual Eze in Lagos. 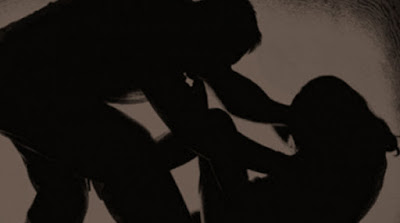 But barely three months after she started living with the family, who promised her care, boarding and feeding in exchange for her domestic work, she had allegedly been raped by the man of the house, Mr. Afrobet Eze, three times.

The girl was in tears as she explained in Pidgin English how she was raped by her ‘uncle’, and then tortured by his wife, who verbally abused her as a “useless girl who will never amount to anything.”

to the market that morning. Electricity came on and their children and I rushed to the sitting room to watch a movie.“But while we were watching a movie, the children slept off and my uncle came down from the room and asked me what I was doing. I told him I was not doing anything. He asked where my aunty was and I told him she went to the market.“He then came to sit beside me and asked ‘Do you love me?’ I did not understand what he meant. So, I said, ‘uncle what do you mean’? He asked how old I was and I lied that I did not know my age. He asked again if I loved him and I said I did not understand. I had his daughter on my lap at the time and she was sleeping. I then stood up from the chair to go and sit in the balcony. He came to meet me again and asked if I loved him.“I left the balcony again and he was following me around the house. I started crying when he won’t stop following me around. Then, I went to my room and he said, ‘You think you are strong abi?’ He left me alone. When my aunty came back from the market and found me crying, she asked what was wrong but I was afraid to tell her.“The next day, I bathed the children and prepared them for school. My aunty went to her shop and I was the only one at home with uncle. He was upstairs while I was downstairs washing clothes, plates. I was also trying to cut the grass in the compound.”Janet said when she was done with her chores, she went to bathe.According to her, she tied a towel around herself once she was done in the bathroom and entered her room.

She said she closed the door but it suddenly swung open and she was suddenly facing her ‘uncle’ who immediately grabbed her towel.

Janet said, “When he started pulling my towel, I began to shout because I knew some people live beside our compound. I thought somebody would hear.“I was begging him to leave me alone. But he said, ‘You think you are wise abi?’ When he noticed that I did not stop screaming, he left the towel and left the room. I quickly dressed up.“He then called me to come and pick his phone to go and charge it in our neighbour’s apartment. I did as he asked and he went out too. About one hour after, he came back  and told me to go and bring the phone.“When I came back with the phone, I met him with a wire and knife and he said if I did not do what he wanted, he would kill me right there and bury me. He said if his wife asked where I was, he would say I had run away. I ran inside my room and he ran after me. That was the day he first forced himself on me.“I cried till he was done and continued crying till his children came back from school. When the wife came back from work and asked me why I was crying again, I did not know what to tell her. I was afraid.”Janet said few days after that, her aunty went on a journey to the East and around 11pm that day, armed with the same wire and knife, ‘uncle’ forced himself on her again.“I begged him. I told him he wanted to kill me but he said I would not die,” the girl said.But Mr. Eze was not done.

The day his wife travelled to Cameroon to buy goods, Janet said ‘uncle’ again raped her.

Janet told Saturday PUNCH, “That day, aunty took her children and I to her sister’s house to stay there for the period she would be away. But the sister later said she wanted to travel to the village. We went back to the house.“That same day, my uncle started the same thing again and he raped me. I told him that day that I would tell my aunty when she came back. But he said he would kill me if I did and nothing would happen.”When her aunty came back from her journey, Janet could not summon the courage to tell the woman about her husband’s actions.

But the man who feared that the girl could spill the beans, decided to pre-empt her by telling his wife the opposite of what happened.“My aunty called me and said, ‘I know what you did to my husband.’ I don’t know what uncle told her but she said I forced myself on her husband,” the girl said.She told PUNCH that the following day, Mrs. Eze called her sister and both of them put her in the middle to question her.

According to her, the woman took a knife while her sister wielded a small pestle. They beat her as they pestered her to confess her sins, the girl said.

She said even though she was screaming while the torture lasted, her uncle who was upstairs at the time ignored them.

Janet said, “I shouted to uncle to come and help me but she told me to shut up. My aunty went out and carried a keg of water which she poured on me.“In the night, she woke me up and beat me again. My aunty kicked me in the tummy. When some neighbours started asking why I was shouting so much, the husband came down from upstairs. I then used the opportunity to run out of the house.”Janet’s aunty, Regina, a trader, who brought her to Lagos said she thought bringing the girl to the Ezes was an act of mercy. She said every time she saw Janet in the village, it broke her heart.

Then, one day, she heard Mrs. Eze, a customer of hers talking about getting a housemaid and thought Janet would fit in.

Regina said, “Janet’s father is my uncle. Both the father and mother died few years ago and she has been suffering ever since.“She was living with one of his mother’s brothers in the village but the young man was not helping her at all. I thought if she came to Lagos, at least she would have a roof over her head. Now, I regret it because I believe every single thing she said about that family. Blessing never lies.”But Mr. Eze insisted all the girl told were lies.

He said, “The only reason my wife beat her was because she wanted to run away. She stole a phone and some jewellery. That is why she concocted all these lies.“I don’t know where she is from and I don’t even know her age. My wife is the one who brought her home. It is true my wife went to Cameroon at a time. I beat her that day only because she took my children to play outside our compound. I did not rape her that day or on any other day.”Regina took the girl to the Esther Child Rights Foundation, which has since reported the matter to the police at the police division along the LASU-Iyana Iba Road.

But the man has yet to be arrested.

Executive Director of the Esther Child Rights Foundation, Esther Ogwu, said she had taken the girl for treatment and testing at the Mirabel, Lagos State’s sexual assault referral centre in Ikeja.“It is unfortunate that we hear of this kind of thing every day and it is heart-breaking that some men have refused to rein in the beasts in them. This is a case we will continue to follow up but more importantly, the girl needs a home where she can grow up to overcome the trauma of what has  happened to her,” Ogwu said.Source - Punch