30-year-old Bosede Adelani was standing at a junction on Acme Road, Lagos when a man, Adepeju Olukokun, approached her. That was on the morning of Thursday, January 19, 2017,

A physically challenged woman, who had been surviving through the kindness of strangers, she believed that God had brought along a helper that morning. 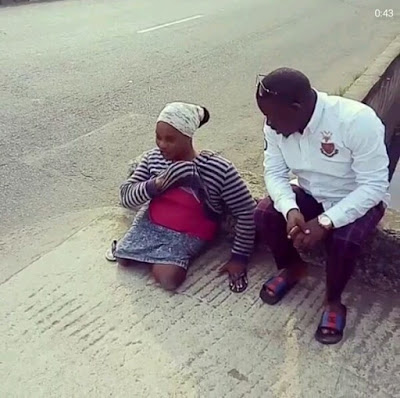 “He sat beside me and asked if I needed a wheelchair and I told him that I already had one. He brought out a bundle of money and it surprised me because nobody had given me that much money before.“But he continued holding the cash asking me questions. When I realised that he seemed to be really interested in what I needed, I then told him that I was setting up a shop to sell soft drinks. Through the money I made from alms, I had bought a freezer. All I needed was the shop. I told him this and he said okay.“When he was leaving, he gave me two N500 notes from the bundle he was holding and I thanked him. He also dropped his phone number with me. He said I should call him by 4pm that day.”Adelani said she was shocked few hours before that 4pm when she started receiving calls from family and friends asking about “the man who had made her rich.”

They said I was all over the internet.Adelani said unknown to her, while Olukokun was holding a bundle of cash, speaking with her, another friend of his was nearby taking pictures and recording a video of the encounter.

Few hours after the man left, Adelani’s pictures and the video of how “her life changed” had started circulating on the internet. 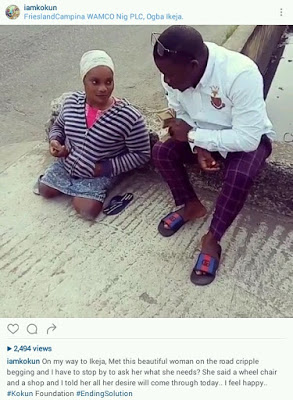 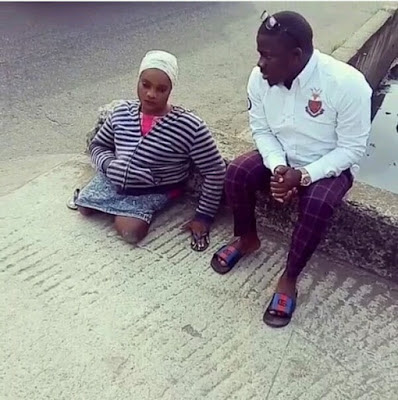 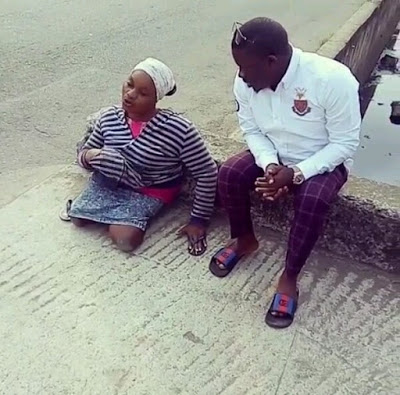 Olukokun posted a series of pictures on his Instagram page with the caption:

“On my way to Ikeja, I met this beautiful woman on the road cripple begging and I have to stop by to ask her what she needs? She said a wheelchair and a shop and I told her all her desire would come through today. I feel happy #Kokun Foundation #EndingSolution.”His Instagram page is filled with many other pictures of him in purportedly providing help to other people.

But Adelani said after she was alerted to the online photos, she contacted Olukokun, who told her to come to the office of the Special Anti-Robbery Squad if she still wanted his help.

“When I called back again, I wanted to beg him to pull down the pictures online because I did not want to become another stunt. He said I was disturbing him. It is not that I am an ingrate. I thank him for the N1,000 he gave to me. But I don’t want to be used for a publicity stunt,” Adelani said.The woman said she was afraid for her life and fear attack by “area boys” in her neighbourhood who believe she is now rich.

PUNCH reports that when their correspondent contacted Olukokun, he explained that he was indeed interested in helping the woman but that after he posted the picture, a lot of people had called him to indicate that they had helped Adelani many times but she had refused to leave the street.

“She lied that I gave her N1,000. I actually gave her N4,000. I have helped many people. I told her to come to the SARS office so she could write an undertaking that if I helped her, she would leave the street. But she has refused to come,” he said.Asked if he could simply pull the pictures he had posted on the social media down, Olukokun said the pictures were evidence of his works since he ran a non-governmental organisation.

Punch correspondent asked him why he could not simply wait till he had fulfilled Adelani’s wishes before posting the pictures, he said,

“Money is not easy to come by. Many people may see the pictures and want to help her more. Do you know that I can still get her arrested if she continued to stay on the street? I am still interested in helping her though.”Olukokun did not agree to pull down the pictures but Adelani explained that she might be forced to report the matter to the police.