A two-month-old baby, Kudus Adebowale, was abducted by a customer at a market in the Badagry Roundabout area of Lagos State. 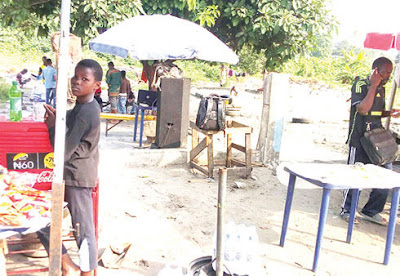 Part of the marketKudu’s mother, Mrs. Alimat Adebowale, sells biscuits in the market, while the suspected abductor was identified simply as T-girl.

According to Punch, T-girl was well known to most of the traders in the market and had lived in the community for over four years until a few months ago when she travelled.

T-girl was said to have returned to the neighbourhood last week and went to the market, where she

was treated to a warm reception around 9am on Thursday.

It was gathered that she approached Alimat, who was breastfeeding the baby, Kudus, and took the child under the guise of playing with him.

She reportedly strapped Kudus to her back afterwards and sat on a chair behind his mother, who was busy attending to customers.

“Nobody knew when she (T-girl) disappeared from the market with the baby. The mother had looked back to check on Kudus, when she discovered that she had left the market with her child. We called her number, but she didn’t pick our calls. That was when it occurred to us that she had stolen the baby.“I don’t really blame Iya Kudus. She thought the child was in a safe hand because almost everybody here knows T-girl. She would come to buy things here and play with us. She is from Ibadan (Oyo State) and had lived here for more than four years before she travelled some months ago. She came back last week,” a woman, Kemi Agboola, who sells bread and drinks in the market, said.A resident, Kayode Paul, told PUNCH Metro that the incident was reported at the Badagry Police Station.

He said the police arrested T-girl in Ibadan after some passengers with whom she boarded a bus en route to the  Oyo State capital raised the alarm.

“It was said the bus had a minor accident on the way to Ibadan and the driver had to wait for some moments. As they were waiting, Kudus started crying and the passengers urged her to breastfeed him. She refused.“As the baby’s cries increased, they compelled her to breastfeed him and she reluctantly agreed. But the baby did not suck her breasts, which made the passengers to be suspicious. After threatening to beat her up, she said she was taking the baby to her mother in Ibadan.”The passengers took her to the Yemetu Police Station in Ibadan, and she eventually confessed to have stolen the baby in Badagry.

“The police in Ibadan contacted the Badagry division and the mother and her husband travelled there to recover their child. He is two months old,” Paul added.Alimat, who spoke with Punch on the telephone on Saturday, said she had been reunited with her baby. She stated that she had initially declined to give Kudus to T-girl.

“People were playing with my baby that day when she said I should also allow her to take him, but I refused. She asked if she had offended me and pleaded that I should let her carry him. I suddenly discovered that I didn’t see her again and people joined me to search for her to no avail.“My child was two months  old that day. The woman used to come here to buy drinks and play with us. I am now with my baby. We will return to Lagos on Monday (today).”The police in Ibadan said the suspect gave her real name as Yetunde Awosanya, and identified herself as Alimat’s friend.

“She said she travelled with the baby with the consent of his mother. But after interrogation, it turned out that she was lying. The case will be transferred to Lagos,” the police source said.The Police Public Relations Officer, Lagos State Command, SP Dolapo Badmos, who confirmed the recovery of the child, said the suspect would be transferred to the command for further investigations.

“Investigation is still on and the Commissioner of Police has directed that the case be charged to court at the conclusion of investigation,” she added.