The police in Lagos State have launched a manhunt for a mechanic, Fatai Bashiru, who allegedly killed a sales boy, Shedrach Emenike, aka Chiboy, in the Papa Ajao, Mushin area of the state. 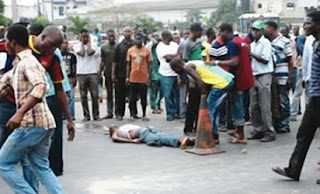 File photoPUNCH Metro reports that Bashiru stabbed the 23-year-old in the armpit and other parts of his body for allegedly scratching a car belonging to his customer.

The victim was rushed to a general hospital where he was confirmed dead. The suspect fled after

learning of Emenike’s death and his whereabouts had yet to be known.

The case has been reported to policemen from the Ladipo division before it was transferred to the State Criminal Investigation and Intelligence Department, Yaba.

A resident, who did not want to be identified, said the incident caused tension in the area as the police later returned to make some arrests. He said,

“The boy worked in a beer store and usually supplied customers in the area. The day before the incident, he had gone to supply goods to some customers and was alleged to have mistakenly scratched a car parked by the roadside with the truck he drove.“The following day, he had gone to deliver goods again when the mechanics in the area spotted him and they challenged him for scratching a car belonging to their customers. In the process, there was a disagreement and the man (Bashiru) picked one of the bottles in the truck, smashed it on the ground and stabbed Chiboy (Emenike) in the armpit.”The victim’s boss, who identified himself only as Marcel, said the Anambra State indigene had worked with him for only three months before the incident.

Marcel, who spoke with Punch on the telephone, explained that it was barely 30 minutes after Emenike left to deliver the goods that he was told that he had been attcked.

“I rushed to the place and saw him in a pool of blood. He was rushed to a hospital where he died. Since then, the suspect had yet to be found,” he added.PUNCH Metro says they gathered that the police arrested some co-workers of the suspect, but later released them when there was nothing linking them to the crime.

A resident, who did not identify herself, said the police later arrested the parents of the suspect.

“Afterwards, they were also released. I was told they have all closed their shops and run away,” she said.The state Police Public Relations Officer, SP Dolapo Badmos, confirmed the incident, adding that investigations were on.

She said, “We have a report that one Emenike was stabbed to death by one Bashiru. The corpse has been deposited in the Mainland Hospital mortuary, Yaba. Although Bashiru is on the run, one of the suspects is assisting police with investigations.”