GUO Luxury Bus Crash: Survivors Recount How Woman Dived From Window To Save Her Baby


More accounts have emerged on the events leading to the crash of a 59-passenger luxury bus which plunged into a canal at Owode Elede, Lagos, killing three passengers and injuring 23 others.

The luxury bus with registration number GDD 386 YE Anambra, which belongs to GUO Transport Service Co. Limited, was en route to Maza Maza from Aba, Abia State. According to Lagos State Emergency Management Agency, the bus had skidded off its track while speeding and plunged into the canal. 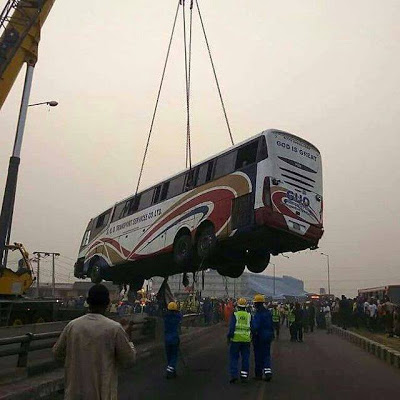 One of the passengers in the bus, Kenneth Ohai, said as the bus hit the median around 3am on Friday morning and veered off the road, nosediving into the canal in the process, the little child his co-passenger was carrying on her lap bounced off the window and fell into the water.

He said the woman immediately dived out of the window to save her baby.

Saturday PUNCH confirmed from the Lagos State Emergency Management Agency that the unidentified woman and her child were unharmed, as they were both rescued after.

According to LASEMA, the child could not have been more than one year old.

Ohai, who was also one of the unharmed passengers rescued at the scene, explained that he believed that the driver must have been momentarily distracted before the crash.

“It was not as if there was a tyre blowout. Truly, if it had slowed down in that part of the road, the bus would not have hit the concrete demarcating the road.“When it hit the median, the speed was too much for the driver to put the bus right and it went the other way again and hit the side of the canal. We were all screaming as it went down. The way it fell, I thought a lot of people would have died.” 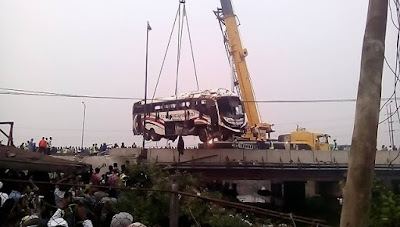 Another survivor, Kelechukwu Ese, said many of his co-travellers escaped through the windows of the bus, adding that he could not explain how he found himself beside the canal.

“I boarded the bus from Enugu State. I wanted to attend an event in Yaba, (Lagos). I sat by the window side and was asleep. Screams of other passengers woke me up. I thought I was dreaming. People started jumping out of the windows. And before I knew what was happening, I landed on the ground with my knees.“I didn’t feel the pain initially and that was why I declined to be taken with others to a hospital after we were given first aid treatment. I am now feeling some pains.”One of the three fatalities of the bus crash was the bus conductor, who was said to have fallen into the water because he sat beside the door.

A LASEMA official said that as he fell, the bus might have fallen on him.

Nine passengers with more serious injuries were rushed to the Lagos State Trauma Centre at the tollgate for treatment, while 14 persons were reportedly treated on the spot by men of the Lagos State Ambulance Service and luggage of the victims were handed over to the police. 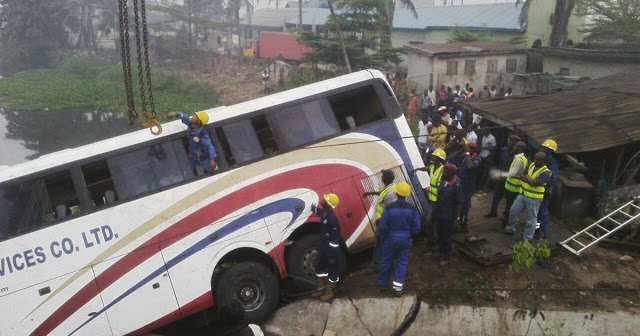 One of the residents, Atolagbe Akande, a local diver, who assisted emergency officials in the rescue operation, said he was woken up by the impact of the crash.

“My house is not far from the canal. Around 3am, I heard a loud sound of something falling. I initially thought I was dreaming. Subsequently, I heard cries for help. That was when I realised something terrible had happened.“I called some neighbours and went to the scene. The emergency officials also arrived the scene a few minutes after.”The wreckage of the vehicle was removed from the canal with a LASEMA crane and towed to the Owode division.

“One of the deceased was identified as Yahya Sidi, a driver, aged about 40 years,” an official told Saturday PUNCH.