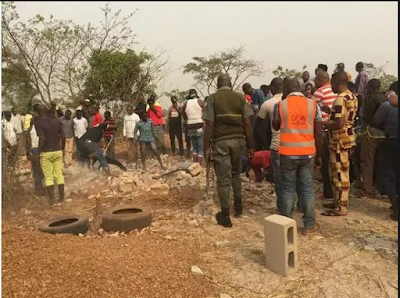 The body of one Sherifat Bello, was exhumed from a shallow grave, dug by her husband who killed her for ritual purpose on Monday, in an uncompleted building in Ijora, Lagos.

It was gathered that, this was not the first time an attempt to take Sherifat's life have been made by her husband.

The couple separated after Bello (Sherifat's husband), inserted a charm in her private part.

Sherifat was killed, after she reached out to her husband for upkeep allowance for their three children. Their initial agreement was to meet at some place in Ebute Metta, Lagos, but they moved to another location in Ijora, where Bello pounced on her and killed her.

He then dug a shallow grave and buried her after dismembering her and removing some of her body parts.

Bello then travelled to Ibadan, his hometown, to avoid being suspected of committing the crime, but Sherifat's family wouldn't be deceived by this after they discovered she was missing.

Bello who was almost lynched by the crowd, had this to say at  Area ‘B’ Police command, Apapa;

“I killed her on Monday. If I did not bury her, people would easily link me with her death. Yet I have been caught. It was the work of the devil.”

Though he didn't say if killed his wife for rituals, but according to a family member, the deceased's missing pubic hair and some other parts suggested that she must have been killed for ritual purpose.

Bello's case has been tranferred to Homicide section of the State Criminal Investigation and Intelligence Department, Yaba, while his wife's exhumed parts were later buried at Amukoko cemetery.