The White House has confirmed that US president Donald Trump has fired his senior US National Security Council adviser, Craig Deare.

Reason - Craig dared to criticise Donald Trump administration's Latin American policies. He has been reassigned to his old job at the National Defense University, an appointed position he's held since January 2001. 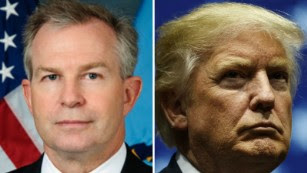 Sarah Sanders, a White House spokeswoman said Craig Deare was removed from his role as a senior

adviser at the National Security Council's Western Hemisphere division Friday and "sent back to his original position'.

Deare had been assigned to the NSC adviser by the Trump administration.

CNN reports they could not independently confirm the account, and Deare did not respond to a request for comment.

Fielding questions about Deare's reassignment, Sanders said that people who don't agree with President Donald Trump should not have a job in his White House.