Pennis-Biting Fish May Be Invading Denmark 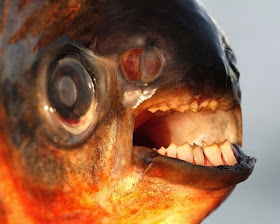 going through his catch after fishing in the

Oresund, the strait between Denmark and

Sweden. Besides the eels and perch,

be a red-bellied pacu, which is native to the

Amazon and has uncannily human-looking

"It's the first time this species has been caught

in the wild in Scandinavia," fish expert Peter

Rask MÃ¸ller of the University of Copenhagen

said in a statement.

fish is a lone wanderer or a new invasive

species will be very exciting. And a bit

The toothy South American fish has crept into

lakes and rivers far outside its native range,

likely after getting loose from aquariums and

fish farms. Though its teeth are used mainly to

crush nuts and fruits, the pacu eats other fish

and invertebrates and there have been some

Guinea, the invasive species has reportedly

earned a reputation as the "ball-cutter" after

castrating a couple of local fishermen.

The specimen snagged by Lindgreen measured

the pacu can grow much larger. Some can

according to the University of Copenhagen.

According to MÃ¸ller, amateur aquarium owners

and fish farmers are the "usual suspects" when

an exotic fish like the pacu ends up on the loose.

"It is not unlikely that someone has emptied

their fish tank into a nearby stream just before a

vacation and that the pacu then swam out into

the brackish waters of Oresund," MÃ¸ller

explained in a statement. "We don't know of

any commercial farming of pacus in Europe.

But just like the piranhas the pacus are quite

easy for amateurs to raise."

Researchers still have to confirm the identity of

the fish through genetic testing, since there are

several species of pacu that look similar when

young and hybrid species produced in the

But for now the University of Copenhagen had

some cautionary advice for the public: "Anyone

choosing to bathe in the Oresund these days