#BBNaija housemates today, were filled with surprises as Bisola and Bally returned to the house escorted by popular TV host, Ikponmwosa Osakioduwa also known as IK, dressed in a Ninja outfit.

IK walked in as a Ninja with Bisola and Bally who have been away from other housemates since Sunday, on faked vacation in “Paradise.’’

Little did the housemates know it was IK until he unmasked himself on the on-going TV reality series.

Housemates went into a frenzy realising that the

After chatting with IK, the housemates could not let him leave without taking parting selfies with ThinTallTony acting as the camera man.

IK , a one-time host of the Big Brother show, is the eight celebrity guest in the #BBNaija house.

Meanwhile, TTT has been working his way back to Bisola as she returned to the house. 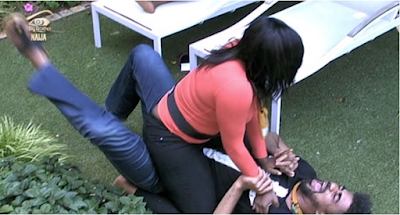 Bisola and TTT were romantically linked before the fake eviction by Biggie.

Though, Bisola was giving him the cold shoulder initially, they later got talking and when Bisola told him they showed her and Bally everything going on in the house he felt uncomfortable.

While away in paradise, TTT made a questionable move to Tboss and even begged her for a kiss.