Somalian Man Arrested For Posing As Bridesmaid For 3 Weeks


Abdirahman Ismail , who bears same name as the groom, has been arrested for posing as a bridesmaid at a recent traditional wedding in Somalia, and also staying with the couple for 3 weeks.

The shocked groom, who is planning to divorce his wife for the embarrassment she caused him, disclosed that he never knew the impersonator was a man, as he wore a makeup that concealed his identity. 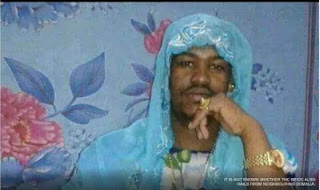 However, his identity was busted by a lady who claimed to be

his mother;  'A woman claiming to be his mother came to our house and asked if we have seen her son named Abdirahman. I told her we have never seen her son and the only person living with us was a girl named Asma.

'That's when the woman told me that Asma is actually her son, Abdirahman' he said.

Somalia cable reports that Abdirahman has been arrested by the Police, after the groom laid a complaint with Police authorities.

According to the Somalia culture, it is expected that the maid of honor not only assists the bride during the wedding, but also helps in setting up her new house.