Arsenal legend Ian Wright has urged Alexis Sanchez to quit the club after he was dropped to the bench for the Gunner's game against Liverpool.

The striker started on the bench as Arsene Wenger’s side lost to goals from Roberto Firmino, Sadio Mane and Georginio Wijnaldum. 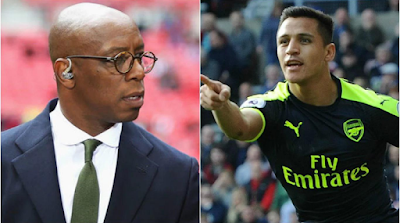 His introduction at half-time as a massive improvement in his side's play and he assisted the Gunner's only goal by Danny Welbeck in the 3 - 1 defeat.

Ex-Gunners star Ian Wright said on BT Sport: “I’d be thinking ‘if I can’t get in this team — hammered out of the Champions League and not in the top four — I know there’ll be other teams’.”

Other Premier League legends like Steven Gerrard and Rio Ferdinand were baffled at the decision to drop the Gunner's star player.

Ferdinand: “His agent will be the first person on the phone saying ‘where do you want to go?’ ”

Wright added: “He has nothing to lose now. It was a strange game to leave him out of, it baffled me.”

Wenger defended his decision to start Sanchez on the bench saying: “I have no special regrets, the only regret is to have lost the game.

“The thinking was that we had to go more direct and bring Sanchez on in the second half.

“I don’t deny Alexis Sanchez is a great player. A decision like that is not easy to make but you always have to stand up.”