Two American Muslim brothers have sparked outrage after they divorced their wives simply by sending them the word 'divorce' three times via WhatsApp.

The men were relying on a clause in Sharia law known as 'talaq', which means that men can divorce their wives simply by clearly telling them they are doing so, which they did using the app. 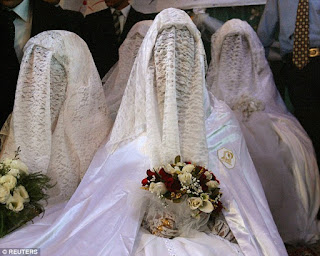 Hussain then sent her divorce papers to Hyderabad, in southern India, from the US, reports India

Mehreen Noor, married to Hussaini's brother Mohammad Abdul Aqeel, then received a similar message informing her that she had been divorced.

'They (the two brothers) have made marriage a joke,' said Mehreen. The two women have now lodged complaints with the police, claiming that the Islamic principle allowing them to divorce them in such a way conflicts with others.

In Sharia law, talaq - roughly translated as divorce - can be declared by the man without court approval but is usually followed by a three-month period, during which time it can be revoked.

The divorce becomes official when it expires but they can still remarry, unless he repudiates her again.

However, the two brothers have used the process of 'triple talaq' to skip the notice period, declaring that there is no chance of reconciliation in a single message.

While the act is permitted under Sharia law it may conflict with Indian laws protecting women in the case of divorce. Not providing for the women could also conflict with other Sharia legal principles.

The news comes as the legality of 'triple talaq' is being considered by the Supreme Court.

The court recently said that religious practice cannot override the rights of women.

'Sharia law lets you divorce me, but who is going to look after our children? Doesn't Sharia law ask of you to take care of your children?'Mehreen has also cast doubt on her husband's identity, claiming he may have lied to her at the time they were married.

'I found out after marriage that my husband's real name is Usman Qureshi. Now, without citing any reason, he has sent me divorce,' she said in a recent report.