A video footage has revealed that a transgender woman, who was dragged from her home and dumped in a wheelbarrow before being rolled to a back begged for her life moments before she beaten to death amid cheers and laughter.

42-year-old Dandara dos Santos, was kicked, punched and hit with shoes and a plank of wood in front of residents in Fortaleza, Ceara state, Brazil, as the person behind the camera who spoke in portuguese said;  "they will kill the faggot", while Dandara's attackers made cruel taunts about her hormone-therapy induced breast, hurling homophobic insults at her. 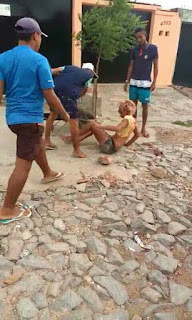 The February 15th incident, which has long sparked online outrage in

the LGBT community, was the 5th transgender murder recorded in Brazil last month.

The footage which has gone viral, has helped the police who are still investigating the murder case, in identifying 6 persons.

According to MirrorUK, between October 2015 and September 2016 in Brazil alone, 123 trans and gender-variant people were murdered. Within the same period, 295 were murdered across the world.

Thirty were reported to be 21 years old or younger, with some as young as 14.