A supporter of Barcelona football club died Wednesday night in Yola, Adamawa State, after Sergi Roberto’s 95th minute goal of the round of 16 clash against PSG, witnesses said.

The fan, identified as Teri, died while celebrating the goal. Some witnesses said he died of “over excitement”. 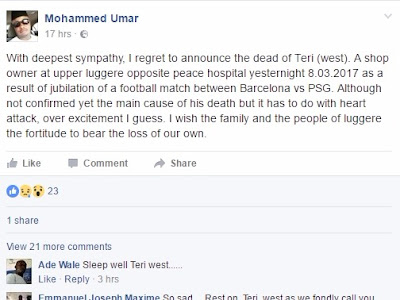 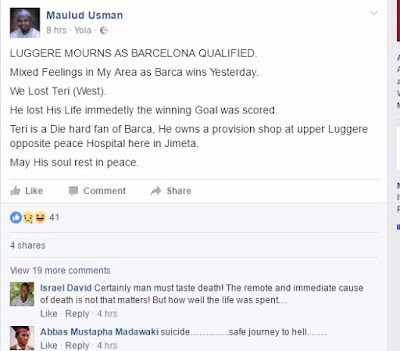 “Teri was watching the match at football show centre and he jumped up to celebrate the last goal scores by Barca unfortunately died celebrating,” a former chairman of Yola Central Development Area said.

He said Mr. Teri, a trader in Luggere area of Yola and a “diehard” fan of Barcelona, went to watch the match with some of his relations, who later rushed him to hospital after he slumped.

The body was later deposited at the mortuary of the nearby Yola Specialist Hospital, he said.