Confusing Accident: SUV Gets Stuck On The Roof Of A 10-foot-tall House (Photos)


That 'how did this happen' moment a Honda SUV that was trying to avoid a tricycle ended up on the roof of a 10-foot-tall house in China.

The male driver was stuck in the car for around half an hour until traffic police officers came to his rescue. 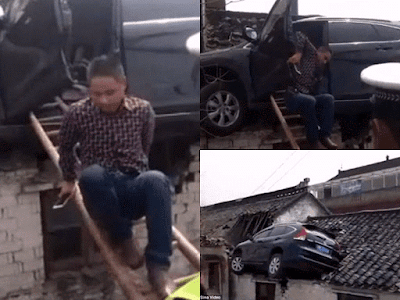 The incident occurred today in Taixing City and there were no reported injuries or casualties according to XianDai Daily.

One onlooker told reporters that the black SUV was driving on Chenghuang highway and gained speed near a junction road.

The car leaned to the right and crashed into the roof of a row of houses, said to be 9.8 feet (three metres) tall, at the road side. The male driver claimed he was driving at a speed of 37-43 mph (60-70 kph) when a tricycle came out from a small road.

In a bid to avoid crashing into the tricycle, he pressed on the gas pedal by mistake and drove at a high speed. He then made a sharp right bend to avoid the tricycle and pedestrians, drifting away from the road and stuck on the roof.

Local traffic police officers arrived and took a ladder from the villagers to free the driver.

A crane company arrived shortly after to remove the car from the roof.