A Ghanaian native doctor who was trying to prove how powerful he is has landed in hospital after he asked someone to shoot him to proof his powers. 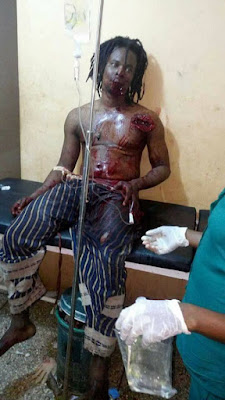 According to Facebook user, Kenny DreemChaze‎ who shared the photos, said the man, Desmond aka Nana Tolofasito is currently receiving treatment at the hospital. He wrote;

"A traditional priest by name Desmond aka Nana Tolofasito who claimed himself to be more power asked somebody to shoot him with gun, to prof his spiritual powers and at long last look at what has happened to him.This has happened at Sekyedumase Newtown.

Currently, he is at Sunyani Hospital for treatment.