A lesbian sex scene was displayed on a big screen at a Dutch polling station, just at beginning of votes counts for the parliamentary elections held yesterday and reportedly won by by Prime Minister Mark Rutte.

The loud moans which came from the speakers however, didn't interrupt the vote counts, as election volunteers diligently counted votes gathered at the polling station.

The incident which reportedly occurred in the city of Enschede in the eastern part of the Netherland, has been confirmed by a spokesman for the mayor's office, who disclosed that the photo taken on the night was genuine.

club members who changed the channel, from the public broadcaster's election night coverage to the sex movie.

The person who took the viral photograph, however captioned it "locker room humour" alleging it was "only a snapshot, just a joke, nothing more, nothing less". 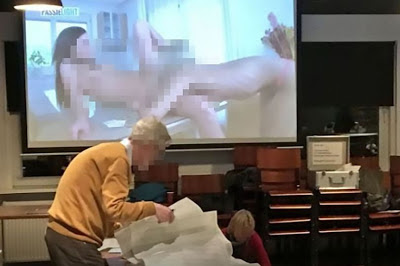