A 15-year-year-old girl, yesterday, narrated in tears how her 42-year-old father had been sleeping with her and her elder sister since their mother left them two years ago.

She said her father gives her N500 each time he wants to sleep with her. Her father, I. D. Idowu, was arrested by policemen at Ketu Division after a concerned neighbour reported the act. 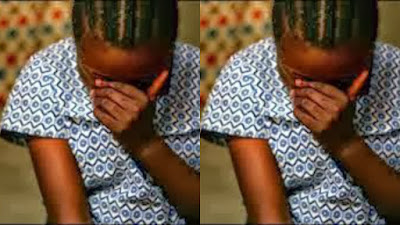 The suspect’s wife left her matrimonial home two years ago when she discovered that her husband was sleeping with their 17-year-old daughter.

But her husband was said to have insisted that she left without either of their three children, all girls, who were aged 17, 13 and eight, respectively.

It was gathered that the eldest child, unable to bear the abuse, left their Ketu home, abandoning her siblings to their fate. Idowu, as alleged by his second child, usually gave her N500 whenever he wanted to sleep with her. How neighbour exposed him

“My father started sleeping with me two years ago, while I was 13 years. The first time he came, he gave me N500 and forced himself on me. “After that day, I did not allow him to touch me again.   The second time he did it, he gave me N500 again. He usually comes to me in the day and night. “So far, he has had sex with me three times and usually gave me N500. I rebuffed him several times.”

It was gathered that a curious neighbour interrogated the girl and she opened up, consequent upon which her father was arrested.

The victim’s mother, Labake, who showed up at the police station, burst out in tears, saying;

“it was because of this same attitude that I left him. I did not remarry. “My only request is that I want my children to be staying with me. I don’t want him to be prosecuted, please. God knows how to deal with wicked people.”

However, when the suspect was interrogated, he denied, describing his child’s claim as false. Rather, he claimed that his daughter fabricated the lie because he scolded her. But the victim interrupted him, saying;

“Daddy, why not tell the truth. You know you are lying. You have slept with me three times.”

As at yesterday, the teenager was taken to the Gender Unit of Lagos State Police Command, Ikeja, from where she was taken to Mirabel Centre for medical check-up.

Police sources at the Unit stated that efforts were being made to take the victim to a social home, from where she would continue her education. The Commissioner of Police, Lagos State Command, Fatai Owoseni, who confirmed the arrest, said:

“He has been doing this for long. He will be charged to court as soon as investigation is concluded.”