The production company hired the mammal for the raunchy advert which features a topless model lying in bed. 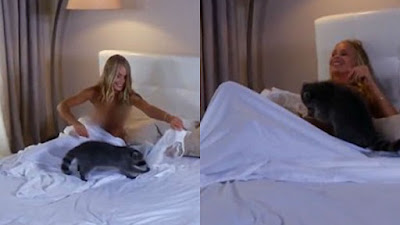 In the saucy footage, a beauty blonde can be seen playing with the fluffy animal. At one point she uses the little black and white creature to cover up her exposed breasts.

The advert has sparked outrage from the private zoo called Animals Are Not Toys, in the Russian capital of Moscow.

They claim that the production company, called Art Msk, failed to tell them about the nature of the advert. "We aim at facilitating even more love from people towards animals and have to suppress any act of animal humiliation. Since the raccoon that was filmed in the commercial can't defend himself, we are here to do that for him."

The zoo was dismayed when they saw behind the scenes footage from the advert. After seeing the sizzling clip online, they asked the company to pull the offending advert in October last year.

But they received no response, so they decided to press ahead with a court case against the firm. 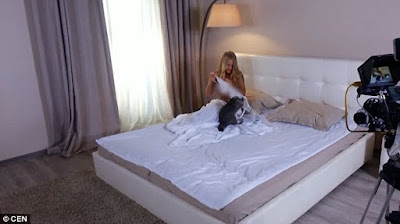