Hian! Lagoon Wahala: Woman Rescued After Jumping Into Lagoon In Lagos Just A Day After A Similar Incident


Just a day after a 35-year-old medical doctor committed suicide by jumping into the lagoon at the Third Mainland Bridge, another of such incidents have been recorded when a woman also jumped into the lagoon in the Maza-Maza area of Lagos State.

Daily Sun reports that the unidentified woman was lucky as the timely intervention of local fishermen and divers in the area rescued her before she could drown.

According to eyewitnesses, the woman had walked casually to the Maza-Maza Bridge in the Mile 2 area and to the shock of people around, she took a dive into the lagoon but the fishermen dived in after her and rescued her.

The woman who dressed in a blouse and trousers had earlier been seen walking aimlessly and when she got to the middle of the bridge, she climbed the rail and jumped.

An eyewitness who gave his name as Emeka said: “The thing happened so fast that we could not stop her. However, when she jumped, we called for help, prompting people under the bridge to dive in and rescue her.”

When Daily Sun got the scene, the woman was seen lying unconscious by the shore of the lagoon, while her rescuers tried to press her bloated stomach to expel the excess water she took in before her rescue.

One of the rescuers, Adewale, narrated further: “We were under the bridge when suddenly the woman’s body dropped from the bridge. At first, we thought she was either pushed over or fell over by mistake.

We had to jump into the river and went for her. That was how we rescued her.”

Though the identity of the woman could not be ascertained before going to press, it was gathered that she was thereafter rushed to a nearby hospital by the police who were called to the scene by concerned citizens. 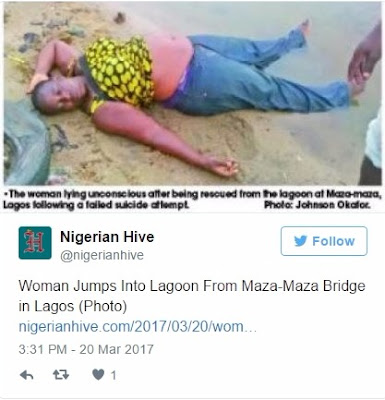