Big Brother Naija's latest evicted housemate ThinTallTony has said he did not deny his family while on the show and the BJ we thought we saw wasn't real. This happened during his interview with BeatFM yesterday.

According to TTT, before going into the show, he had a conversation with his wife and because they are very private people who like to keep their private lives private, they agreed he should keep his family out of the show. 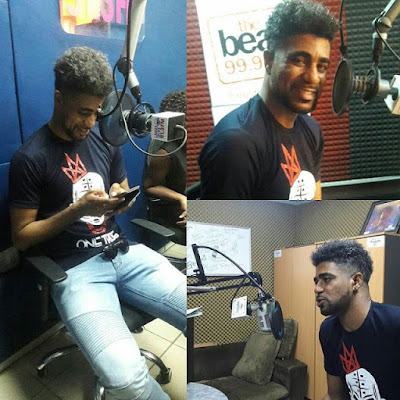 After the cut is a video of that moment. Responding to a question on whether he had such discussion with his wife, TTT said:

“Yes, before I went into the house, myself and my wife, we did speak. We are very private people so we like to keep our private lives private, she’s my backbone and I can’t make any decision without her asking or directing me. So, she made it clear before I

went into the House that you keep my family out of it. I want the world to know you for who you are, your talent, which is what I have been hustling with.”As he answered, Maria Okan, one of the On-Air-Personalities interjected him, saying,

“Save your breath… Hold on… So how do we know that you are not lying? Where is the proof? So because of the N25 million you and your wife decided that you’ll just rubbish your whole marriage, so that you can go and collect money inside the house? There’s the difference between lying and keeping it private?”Responding to a question from Osi Suave on what happened between him and Bisola under the covers, TTT, said,

“Nothing actually went down.” Watch below.