A middle aged public school teacher in Ibadan, Adeyinka Adelakun, on Thursday, narrated how his wife, Kafayat, poured boiling water on his manhood which seriously injured him.

Adelakun had approached an Idi-Ogungun Customary Court at Agodi in Ibadan seeking the dissolution of his three-year-old marriage to his wife on grounds of threat to life and constant fighting. 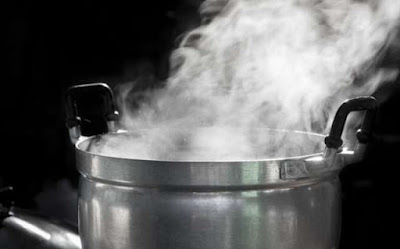 He also prayed the court to allow him to have in his custody their two-year –old child so that he could effectively take care of the child.

According to the plaintiff, Kafayat is in the habit of fighting him and threatening him whenever they

have domestic issues to resolve.

“On Feb 27, 2016, she started her trouble as usual and I decided to call her mother on phone to caution her, but Kafayat brought a kettle of hot water from the kitchen and poured it on my genitals and chest.“The pain was too much, I was rushed to the hospital due to the severe injuries I sustained and I stayed in the hospital for months.“Even I cannot use my injured manhood for any sexual act till now because it has not healed and I decided to quit the marriage to avoid untimely death.“I’m afraid of living with a woman that wanted to finish my manhood because she may do more harm if allow her in my life.”Adelakun presented pictures of his injured genitals as exhibits to prove his case and the court admitted the pictures.

In her defence, Kafayat admitted the allegation but said that it was not intentional and that the hot water mistakenly poured on her husband when he wanted to beat her.

The defendant told the court that she was arrested because of the incident and the matter was resolved later.

Kafayat did not agree with the dissolution, saying she still loved her husband in spite of ill-treatment and lack of care from the plaintiff.

Balogun said the opinion of the court was that there was no more love between the couple and the parties should go their separate ways to avoid more trouble.

The court further directed that the only child of the union should be in the custody of her mother and ordered the plaintiff to pay N4, 000 as monthly allowance for the upkeep of the child.

“The plaintiff should also pay N12, 000 and N5, 000 to the defendant to rent a new apartment and to pack her belongings respectively,“ the court ruled.