It has been alleged that the  family of late Dr. Orji Allwell Chiawolamoke, who jumped into the Lagoon on Sunday from the Third Mainland Bridge while on his way back from church, yesterday chased sympathisers and journalists away from their Abule-Ijesha home at Somolu area of Lagos State. This came as the Lagos University Teaching Hospital (LUTH), Idi-Araba, established a Suicide Prevention Service Centre. About noon, Orji’s elder brother arrived and rushed into the apartment. 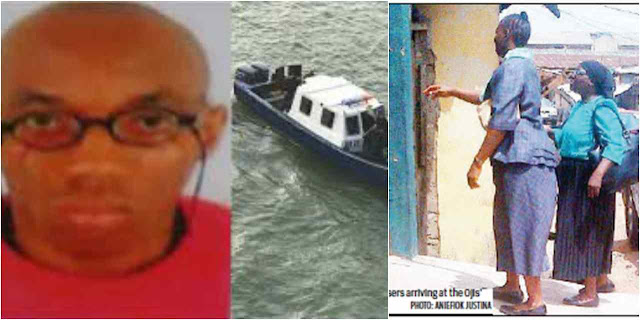 A few minutes later, he ordered all the sympathisers, journalists and church members to leave. Orji’s elder brother, who was visibly angry, marched everybody to the gate and thereafter shut it. He warned journalists, who besieged their house to leave as the death of their brother was a complex one. He said: “We don’t want to see

family members, journalists and neighbours. We are mourning our brother; we need privacy to sort out something. We didn’t invite journalists.”

This was confirmed by an emergency response team member, who craved anonymity. He said: “The last time I called the family, one of them reigned courses on me until I informed him that I was not a journalist but an emergency officer.”

It was observed that those who came to sympathise with Orji’s mother didn’t stay long before taking their leave. Once they stepped out, the gate would be slammed, to prevent people from entering. Efforts to get the burial plans proved abortive as none of the members was ready to comment on the issue. It was learnt that family members were angry with the way the media carried their tragic story.

A source said that Orji’s relatives were angry that what was seen as the most tragic incident in the family was blown out of proportion and celebrated by the media. Meanwhile, emergency responders told our correspondent that construction workers in a Japanese firm discovered the body floating on the water.

One of them, who claimed to have received a text message via the Lagos State Environment and Health Monitoring Unit (SEHMU), an agency responsible for picking up of bodies on the road or disaster victims, said the doctor’s body was found about 3:48 p.m. on Wednesday.

The source said: “Immediately the construction workers sighted the body, they informed their Japanese bosses who then tied it to one of the vessels to prevent it from floating to other area owing to tidal waves movement. That was when they alerted the Marine Police, SEHMU, Lagos State Waterways Authority (LASWA), Lagos State Emergency Management Agency (LASEMA) and other emergency responders.

“When they arrived, they moved the body to the Marine Police Headquarters at Awolowo Road, before the state Commissioner of Police, Fatai Owoseni, was informed. The family members were invited and they confirmed that the body was Orji’s.”

When the New Telegraph visited the hospital yesterday, there was no sign of a condolence register opened in honour of the doctor. Also, no photograph of Orji was hung inside or outside the hospital, to indicate the tragic loss. Rather, normal hospital operations went on as usual. Patients were in the patients’ waiting area.

One after the other, they were ushered into the doctor’s office for consultation and treatment. The hospital environment was serene as normal day-to-day activities went on throughout the two hours that our correspondent spent there.

A doctor on duty, who did not give his name, referred the New Telegraph to the headquarters of Mt. Sinai at 30, Falolu Street, Lawanson in Lagos, where he said official comment from the hospital would be issued from. When asked whether a condolence register has been opened in honour of Orji at the headquarters, he said, “I have not been to the headquarters in Falolu, hence I don’t know. You will find out if you get there.

“At the appropriate time, Mt. Sinai, as a corporate organisation, would make its plan known (in connection with the burial).” The doctor added that the hospital was already in touch with Orji’s family. When told that those at the headquarters might not know Orji since he did not work there, the doctor said: “They employed him.”

However, efforts to get the comment of the Medical Director at the Mt. Sinai Headquarters were resisted by a front desk officer. Responding to the request from the New Telegraph to see the medical director, the receptionist said: “He is not around.”

As it was at the Papa Ajao branch, no condolence register was opened for Orji at the Mt. Sinai Headquarters at Falolu. When our correspondent visited Ojuelegba District of the Deeper Life Church yesterday, the pastor refrained from commenting on Orji’s suicide.

According to him, the authority to speak on such matters must be obtained from the General Overseer, Pastor W. F. Kumuyi.

However, a member of the church’s marriage committee, who identified himself as Mr. Ibekwe, said Oji’s action was an embarrassment to all the members of Deeper Life. Ibekwe said the mother of the deceased was a pastor in the church.

As if responding to Orji’s death, LUTH has initiated what it called the Suicide Research and Prevention Initiative and Staff Emotional Care Services (SURPIN/SECS). The hospital’s Chief Medical Director (CMD), Prof. Chris Bode, said the centre would collaborate with other relevant government agencies to help save lives and prevent death by suicide both locally and nationally.