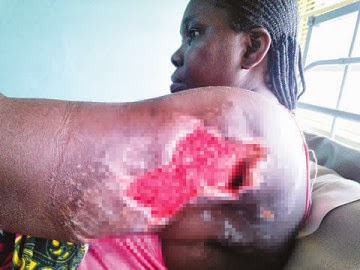 The National Welfare Officer of the Academic

through traumatic pains, at the University of

said, â€œWe travelled in a convoy from

ASUU Benin zone. We stopped at a filling

station to refuel on the way to Kano. The

travelling team was from University of Benin,

and I asked the

driver to slow down so the others could

catch up with us. My saving grace was that I

kept looking back and the rest is history.â€ This is

contrary to reports that she was treated and

discharged in Lokoja, Kogi State, shortly after the

accident, which was caused by the convoy of

12. The widely condemned accident, which

while members of the union were on their way

Kano for a meeting, claimed the life of the former

was learnt that she had undergone two major

surgeries, one on her right leg and another on

"I am still in hospital. My injuries are not minor,"

she told Punch, adding that she had been

traumatised for weeks following the discovery

that Prof. Iyayi died in the accident.