Huddah: ‘I Wanna Eat My Own PU**Y. I’m So Proud Of Myself!’, Replaces Breast Implant (Photos)


Huddah Monroe has replaced one of her breast implants and the Kenyan socialite is super proud of herself.

According to Ghafla, the former BBA star, who recently visited Beverly Hills, went on the trip to replace one of her breast implants, a surgery that reportedly was performed by Dr. Eugene Kim and Dr. David Kim’s plastic surgery clinic in the city. 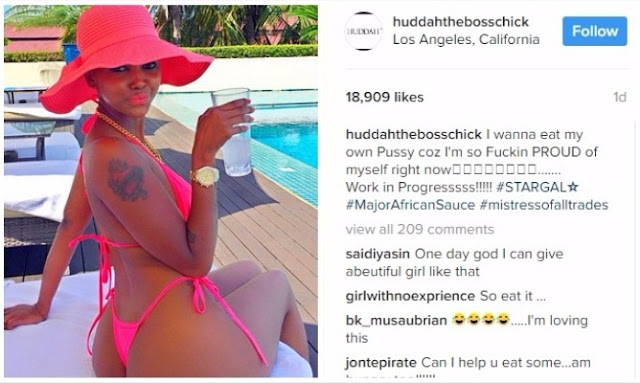 Recall that the former BBA star was mocked by her nemesis Vera Sidika, after the latter discovered that Huddah was visiting the United States.

Vera went on a long rant, alleging that Huddah was in Miami for a cheap, dangerous surgery, and then she urged her adversary to ‘hustle’ , make more money and opt for a better plastic surgery in Beverly Hills, where the procedure is much safer.

Huddah replied later, slamming Vera. While the petite socialite did not explicitly say she was in the city for plastic surgery, she clarified that she wasn’t in Miami either. “I don’t usually take pics at sign posts but it’s BEVERLY HILLS Bitch! 🖕🏾And anyways how else would you know I’ve been here 😂 #ThatShouldTeachEm,” she said. 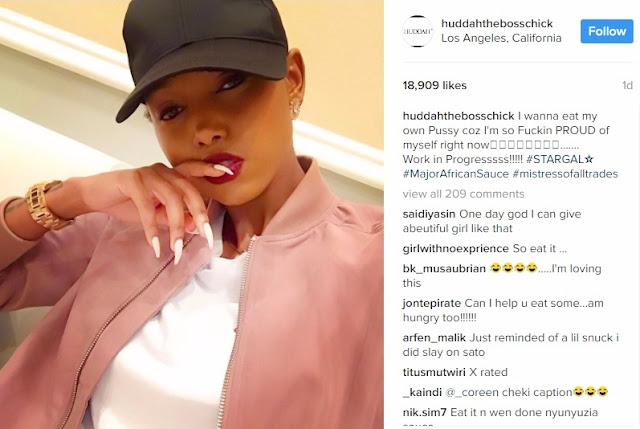 Well, Ghafla has confirmed that Huddah has just had an implant replaced. And now, the socialite is bragging about her achievement and is so proud of herself that she longs to give herself a ‘head’.

“I wanna eat my own Pu**y coz I’m so Fuckin PROUD of myself right now……. Work in Progresssss!!!!! #STARGAL⭐️️ #MajorAfricanSauce #mistressofalltrades,” Huddah wrote.

Yeah, some women can now brag about their plastic surgeries!