The 57-year-old man, Magaji Dansale, who yesterday confessed to raping his seven-month-old stepdaughter, has described hi action as “regrettable and an act of the devil”.

Paraded alongside other suspected criminals at the Katsina Police Command headquarters yesterday, he said his action was uncalled for, and pleaded for leniency. 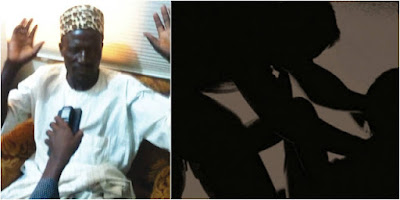 The native of Dangaske Village of Jikamshi in Danmusa Local Government Area, as reported by Daily Trust said:

“I had dreamt that if I had sex with the girl I would stop my unwanted frequent travels, so I went ahead and did what I did.” He said before he married the girl’s mother, he was fond of travelling frequently and never stayed in

one place but when his first wife left him with six children, he began to stay at home.

“No sooner had I remarried than my past habit of travelling returned that was when I had the dream one night. I swear, there was no motive behind my action, it was just ordained by God that such would happen to me and it happened,” he said.When asked why he chose the step daughter instead of his biological daughter, Dansale said,

“She is also my child, I just don’t know how it happened. I  regret my action and want to plead for leniency.”The girl’s mother, 25-year-old Zinnai Muntari, said when she woke up for the morning prayers and saw blood on the private part of the baby, her husband asked her to bring the child and after observing her, said it was pile and hurried out to bring some herbs to use on her.

“As a mother, I felt this was unusual and reached out for help at the General Hospital Malumfashi where the doctor confirmed it was a forceful entry that tore the vagina up to the anus. They later referred us to the Umar Turai Children and Maternity Hospital in Katsina,” she said.The girl’s biological father, Ibrahim Nuhu, said there was no going back until justice is served.

“All I want now is to save the life of my daughter and for justice to take its course to serve as deterrent to others,” he said.The state Commissioner of Police, Usman Abdullahi, described the matter as “disheartening and very pathetic”.

“We suspect that the woman was drugged, for how come with probably all the screaming of the baby the mother couldn’t wake up? I assure you, we will charge him to court to get the case to its logical conclusion,” he said as he appealed to residents to collectively help check such increasing societal ills.“It is worrisome for Katsina, the rise in rape cases is alarming. Last year alone, over 110 cases of rape were handled,” he said.