I Have HIV, Had S*x With Several Men -Nigerian Male Prostitute Confesses To T.B Joshua (video)


A young Nigerian man has made a shocking confession in T.B. Joshua’s controversial Lagos-based church, claiming he was delivered from the “spirit of man” which led him into “male prostitution.” According to Jonathan Etumodor, a Delta-State indigene, he felt an ‘evil spirit’ enter him during a casual swim in a river as a young boy.

Growing up, he began having “affection” for his fellow men. “Older men would meet me, have sex with me and pay me,” Etumodor recounted. “Sometimes, they would invite me to their homes, even when their wife was there. They would put me in their guest-room, telling the wife that I was someone from their office”, he said. 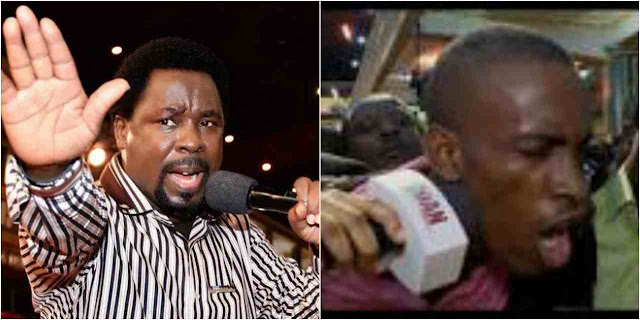 According to the young man, his mannerisms and mode of dressing became increasingly feminine as time progressed, stressing “Everything about me was just like a woman”. Etumodor further

revealed that although he was diagnosed with the deadly HIV, that did little to quell his activities. “I started infecting people and the people I infected, began infecting others”, he claimed.

He said each attempt to start a business from the proceeds of prostitution ended up in disappointment, leading him to delve deeper into the illicit trade, going to gay chat rooms online to advertise his ‘services’. However, when visiting his sister, Jonathan said he discovered Emmanuel TV, the Christian station belonging to Joshua, which she watched faithfully. “If I came closer or touched the TV when T.B. Joshua prayed, I always found myself on the ground,” he recounted.

Jonathan says he felt a strange force visibly leave his body during the time of prayer. “I was trying to hold myself from where I was but I was uncontrollable,” he recalled.

A week after the prayer, Etumodor went to the Synagogue to share his testimony that his desire for men had gone and he had since been “admiring” ladies. “To the people I have initiated, to the homes I have broken and to the husbands whom I have taken away from their wives, I am very sorry for what I have done,” he begged, insisting it was the devil’s work.