An ex-beauty queen, Bolarinde Damilola, has dropped bitter words on a 'dubious pageant' she won and all the promises made to the winner (Her), which Includes a car, trip to California and contracts none has been fulfilled.

She took to IG to call the organizers out, she penned

'My name is Bolarinde Damilola,born June 29 1996. On 14th December 2014 I was crowned the face of Amber organized by @faceofamber signaling the birth of a new phase in my life. 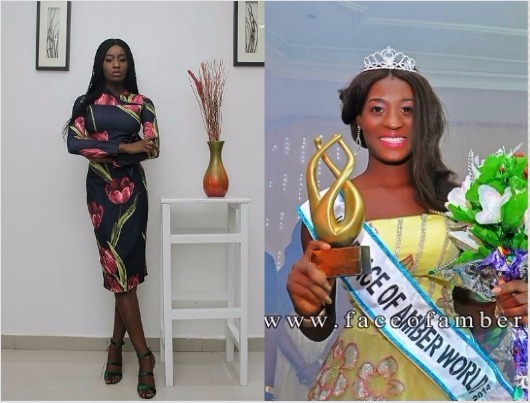 I was beyond ecstatic,I believed I was blessed and highly privileged​ to wear such a prestigious crown or so I thought. As the winner I was promised a brand new car,a trip to California, modeling contracts, cash prize etc.

Unfortunately,till now I have received non of my prize, luckily for me I was given the sum of 5thousand naira twice and nothing more. I have worn the crown for over 2years with so much sadness and a sense of helplessness.

I was crowned by @melvin0duah and severally I have vented out my frustration to him on how I have been unfairly treated by the organizers of Amber pagent but lately he simply ignores them.

Maybe its the country or perhaps as a people we feel its okay to walk over the voiceless, why should we feel its normal to act dishonestly towards​ others?

Why should i not receive what is rightfully mine? Why should i wear a crown filled with so many thorns? That I shall never know but what I do know is with this experience I have learnt a lot in life. On how to be patient,on how to always see the light at the end of the tunnel, on how to always believe humans will be always be human and that looks can be deceiving,everything is not always as it seem.

Although I was unfairly treated, I believe queens are not just crowned they are also made, as queens we should stand against injustice in the society.I stand against it!

On several occasions I have been asked "queen where is your car, Are you in California now?" but little do they know that heavy is the head that wears the crown.

Today marks the end of my reign, a new queen will walk the same journey I did. Goodluck!